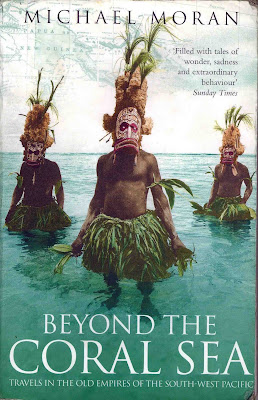 Beyond the Coral Sea

East of Java and west of Tahiti a bird of dazzling plumage stalks the Pacific over the Cape York Peninsula of Australia.

In her wake, she spills clusters of emeralds on the surface of the deep.

These are the unknown paradise islands of the Coral, Solomon and Bismarck Seas lying off the east coast of Papua New Guinea.

The islands were the last inhabited place on earth to be explored by Europeans and even today many remain largely unspoilt, despite the former presence of German, British and even Australian colonial rulers.

Beyond the Coral Sea – a book which portrays Papua New Guinea in a new light – is now being sold in bookshelves around the world.

Written by Australian Michael Moran, the book is arguably the most- comprehensive travel book to be written about PNG in many years, and introduces a new area to travel literature.

Beyond the Coral Sea introduces the adventurers, mercenaries, explorers and missionaries – past and present – who have inhabited the islands and brings them vividly to life.

“My PNG book has sold well in paperback but is not really a bestseller as normally understood, but for a book on PNG it has done brilliantly, particularly in international reviews and prizes,” Moran says.

“I have received many private letters from all sorts of people, also Papua New Guineans, who love the book.

“I notice on the internet the book is also in many university libraries around the world – Oxford, Cambridge, Australia and many in the US.

“This is excellent news for me and I am proud of it.

“In March 2005 I was invited to deliver the prestigious Monday lecture to the Fellows of the Royal Geographical Society in London – a great honour – and I used many slides of PNG and some rare recordings Malinowski made of cannibal laments in the Trobriand Islands. It was very successful.

“The book was short-listed for the world’s premier travel book prize in 2004 – The Thomas Cook Travel Book Award.

“This also was a great achievement – a first for an Australian travel writer and a first for PNG.

“Unfortunately I did not win but was runner-up.

“It gave excellent publicity for tourism to PNG.”

Moran begins his journey on the island of Samarai, historic gateway to the old British Protectorate, as the guest of the benign grandson of a cannibal.

But rather than a tale of cannibals and blood, this is a journey in the romantic and adventurous spirit of Robert Louis Stevenson and an exploration of encroaching change in remarkably diverse cultures.

Along the way Moran explores the role of superstition, magic rites and the occult in the lives of the islanders, including the trading route of the Kula Ring which unites many tribal island groups in a mystical exchange of symbolically valuable objects, one set travelling clockwise around the ring, the other anti-clockwise.

Moran describes the historic anthropological work of Malinowski in the Trobriand Islands and also catches up with some of the adventurers, mercenaries, explorers, missionaries and prospectors he has encountered on previous journeys.

He explores the former capitals of German New Guinea and headquarters of the disastrous Neu Guinea Compagnie, its administrators decimated by malaria and murder.

He travels along the inaccessible Rai Coast through the Archipelago of Contented Men, following in the footsteps of the great Russian explorer “Baron” Nikolai Miklouho-Maclay.

His narrative is interwoven with the fabulous and humorous stories of eccentric residents such as the glamorous “Queen” Emma on New Britain, the deranged Marquis de Rays who attempted to found a utopian colony on a malaria-infested shore of New Ireland and the impetuous sexual exploits of a young Errol Flynn.

“Queen Emma” of New Britain, who was born of an American father and a Samoan mother, built up a large empire of copra plantations, as well as traded in the fabled obsidian (black volcanic glass) and entertained on a lavish scale with imported food and French champagne.

“People are impressed with the appearance and general ‘seriousness’ but relaxed writing style of the book and my colour photographs of the lovely blonde children (of New Ireland) and landscapes,” Moran said.

“Those amazing New Ireland men in tatanua masks on the jacket have hardly ever been seen in the UK.

“The island provinces of PNG are regarded as incredibly exotic here.”

The book has been well reviewed in the Times Literary Supplement, a very prestigious journal, and the Daily Mail newspaper, which has a circulation about 2.5 million as well as others.

“She knows everybody I mentioned by name, particularly the Milne Bay area,” he said.

“We have come to similar conclusions about the problems of PNG, as she has a serious social conscience.

“The book is not 100 per cent positive, of course, as I tried to present a balanced picture of the more sensational and incredible events of its original ‘Western survey’ as well as a generally-glowing picture of the peaceful and beautiful people island people I met.

“The Highlands and the problems of that region could be on another planet compared to the island provinces.”

Moran concluded: “I truly hope that this happy, charming and informative book will assist tourism to your beautiful country – it really needs some positive press.”

Email ThisBlogThis!Share to TwitterShare to FacebookShare to Pinterest
Labels: sea