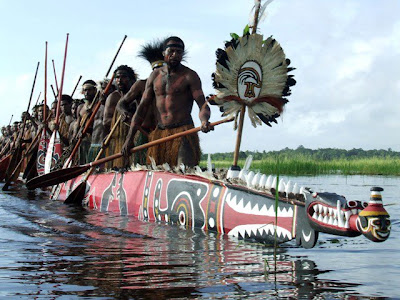 The popular Gogodala Canoe Festival will be held from April 23-24 in remote Balimo town of Western province.

It will be a celebration of the spectacular canoes, arts and crafts and traditions of the Gogodala people.

The festival was incepted as the Balimo District Agricultural and Cultural Show five years ago and has grown to be bigger and better each year.

“Their culture is associated with the canoe and many depend entirely on canoes for their daily survival.

“Many of their creative imagination art works surround animal figures associated with clans.
“And each clan has its own war canoes which are a massive 40 metres or more in length.

“These were the war canoes used in the olden days for warfare between tribes.

Now, the Gogodala Canoe Festival strives for continual maintenance of this important culture.”

Email ThisBlogThis!Share to TwitterShare to FacebookShare to Pinterest
Labels: gogodala