Forging relationships between Australia and PNG the 'Fuzzy Wuzzy' way 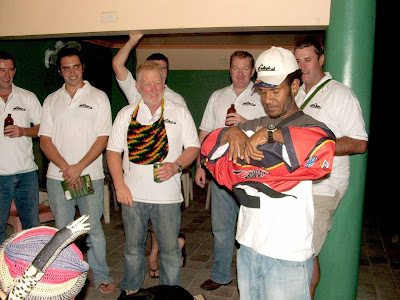 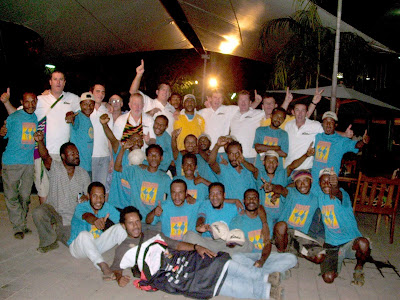 Relationships between Australia and Papua New Guinea took a turn for the better at the Hideaway Hotel in Port Moresby on Tuesday last week.

And no, it didn’t take politicians or bureaucrats to do that, but simple Australians and even simpler Papua New Guineans.

The nine Australians, all members of the Noosa Rugby Union Club in Queensland, tackled the difficult Kokoda Trail over nine days.

They were accompanied by a dedicated group of guides and porters from Kokoda, villagers along the famous WW11 trail, Koiari, as well as Port Moresby.

Many of these young men were once misfits of society, now under the wings of up-and-coming 100% nationally-owned trekking company, Fuzzy Wuzzy Expeditions.

The Australians and Papua New Guineans enjoyed a beer and barbeque in typical Aussie fashion, sang songs and exchanged gifts at the Hideaway Hotel.

The occasion was witnessed by Southern Region police task force commander, Reuben Giusu, who extolled the virtues of Fuzzy Wuzzy Expeditions in the fight against crime

“We are all from Queensland in Australia, from Noosa Rugby Union Club,” explains group leader Robin Yates.

“And for us, we want to maintain the friendship that started in those days, even though we’ve got good times now.

“So there’s been special relationship between Australia and New Guinea for 60 years now.

“And one way for us to experience that special friendship is for us to come here, walk with the guides and porters, have a lot of fun, it’s a very hard trek.

“For me, I’ve climbed Kilimanjaro (Africa), Everest Base Camp (Himalayas) and Lima Trail in Peru.

“And this trek was very tough.

“But this trek is different because for this time, in our hearts, we are remembering our forefathers and all the brave people who died here and all the help that was given to Australian soldiers from the people of New Guinea.

“Eve though we are at peace now, it’s important for the younger people to remember the very special relationship that existed between your guys and us all those years ago.

“It’s important for the people in Australia not to forget that Papua New Guinea and Australia have been very good friends for many years and will stay that way.

“And for all these brave people that died here, whether from Papua New Guinea or Australia, even though they are dead, they will live forever because they are in our thoughts and hearts.

“And by doing this trek, we can really understand just how difficult it would have been for them all those years ago.

“And for us to get to know some of the porters and guides, even when we were lying because our knees were hurting, we can still all laugh together, what I’m sure our forefathers did all those years ago when they established these bonds of friendship.

“That’s only because we’re here.”

Mr Yates, 57, a successful import/export businessman, proved that age was no hindrance when you set your mind on something.

He also cast his vote-of-confidence in Fuzzy Wuzzy Expeditions, especially at a time when it is common knowledge that many Australian companies use Papua New Guineans as mere fronts, with most of the money heading back south.

“We want the money to come to New Guinea, not Australia,” Mr Yates explains.

“We want the money to come to New Guinea, that’s why we used a local company.

“And I’m very pleased that we did because we did a great trek and enjoyed all the people from Fuzzy Wuzzy.

“I’m sure that many more people will want to come and do the same.”

While every day along the WW11 icon was a highlight, he singled out Isurava and Brigade Hill as two that stood out.

“I think, for the boys, the two nights that were really enjoyable were at Isurava and Brigade Hill where we camped, because both of these places were very special back in 1942,” Mr Yates says,

“I guess the other highlight was the finish after all the hard work.

“Everybody sits down and watches TV.

“It’s good to come out, get wet in the rain, sleep in the open, and see the stars at night.

“It was such a good feeling for nine days.”

Fuzzy Wuzzy Expeditions is the new kid on the block that’s taking the Kokoda Trail by storm through the Internet.

He had just set up his new trekking company and the next three years would be a steep learning curve.

Mr Jabbar has slowly, but steadily, been building up his client base since 2004, albeit, without a professionally-designed website.

His website http://www.fuzzywuzzy.com.pg/ was properly designed and uploaded last November and the sky is now the limit.

Mr Jabbar, as far as I know, is the first Papua New Guinean owner of a trekking company to have a proper website.

Many overseas trekkers and tourists prefer to use 100% locally-owned companies; however, the catch is that few of these companies are Internet-savvy.

The lucrative Kokoda Trail market is dominated by foreign-owned companies, many of whom use Papua New Guineans as fronts, and Fuzzy Wuzzy Expeditions is indeed a breath of fresh air.

It has already secured major corporate clients such as SP Brewery and Telikom, while the number of site visits and hits increases by the day.

The situation for many Small and Medium Enterprises (SMEs) all over the world, including Papua New Guinea, is that an entrepreneur (such as Mr Jabbar) owns a small or medium enterprise.

The company produces an interesting product such as organic coffee or arts and crafts, or provides a novel service such as taking tourists across the Kokoda Trail.

The problem: How do we use the Internet to sell the product or service?

The general methodology is to plan, analyse and enact E-marketing activities.

This methodology can be used by anyone who wants to use the Internet to access customers.

And it’s been through such methodology that Mr Jabbar has been able to pull in an extra buck or two into the country, provide employment, as well as promote tourism in this beautiful country of ours.