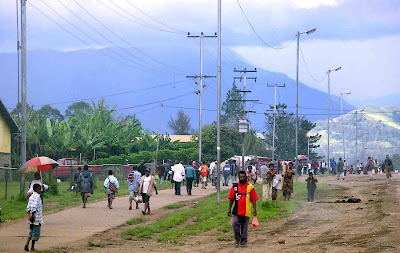 What is it about Goroka and the Eastern Highlands in general that makes outsiders fall in love with the place?
Having lived in Goroka from 1998 to 2002, where I worked for the Coffee Industry Corporation, I can understand why people go there and never leave.
That’s where my wife and I settled together, where our first two sons were born.
Six years after leaving Goroka, I can honestly say that it’s a place that we’ve never quite left and our hearts will always be there.
Before that, from 1975 to 1977, I did my early years of primary school in Goroka.
And in the 1960s, my mum and dad lived there, and that’s where my elder sister and brother were born.
So I guess you can say that Goroka has always been a second home to us.
The first and foremost attraction of Goroka and Eastern Highlands has been the friendly, peace–loving people.
Secondly, there’s the famed ‘perennial spring’ weather of the province.
Eastern Highlands province is made up of eight districts.

They are Goroka, Kainantu, Henganofi, Unggai/Bena, Obura/Wonenara, Asaroka, Lufa and Okapa.
Eastern Highlands has a total land area land of 11, 347 square km.
The Province shares a common administrative boundary with Madang, Morobe and Gulf Provinces and Simbu Provinces.
Eastern Highlanders like to think of themselves as the friendliest people in the Highlands and have less tribal fights compared to other Highlands provinces.
Eastern Highlands has a total population of 432, 792 people.
The Eastern Highlands makes up 8.3 per cent of the total PNG population, which is the fourth highest population in the country after Southern Highlands, Morobe and Western Highlands Provinces.
They are hardworking people who attend to their food gardens, coffee and livestock while the educated ones work in the towns or cities.
Many from all over the country and expatriates have made this province their home either because of work or marriage.
The Province is home to a number of national institutions such as: Coffee Industry Corporation, PNG Institute of Medical Research, University of Goroka, National Sports Institute, Summer Institute of Linguistics, Aiyura National High School, National Agriculture Research Institute, Coffee Research Institute, and Yonki Hydro Power Station.
Non-government organisations such as Research & Conservation Foundation, Wildlife Conservation Society, Save the Children and Eastern Highlands Family Voice have a strong presence in Goroka.
The PNG Coffee Festival & Trade Fair every May and the Goroka Show every September are two major events on Goroka’s calendar.
The province is the regional trucking centre, having one of the Highlands region's major trucking company's operating in Goroka.
The East-West Trucking Company freights cargo and provides service to the entire Highlands region. Apart from that, there are other private trucking firms that freight cargo.
The province's economy lies in the production and export of coffee, which provides the economic backbone and livelihood for all Eastern Highlanders.
Leading exporters of coffee based in the Province are PNG Coffee Exports and New Guinea Highlands Coffee Exports as well as PNG's ground coffee manufacturers Goroka Coffee Roasters, Kongo Coffee and Arabicas Ltd.
The Coffee Industry Corporation headquarters is also located in Goroka.
Eastern Highlands is the leading producer of coffee in the Highlands region.
It produces large quantities of coffee annually for export.
Almost all rural households within the province own a small plot of coffee as a small family project.
A lot of families have now taken to supplementing their family's income by engaging in small agricultural and livestock businesses.
The introduction of vanilla, wheat and rice has had a huge impact on agricultural enthusiasts throughout the Province.

Rice and wheat is being grown for own consumption and/or selling while the vanilla is sold to the international market.
Pigs, rabbits and especially chickens are readily farmed while fresh vegetables are still grown for the local and national markets.
Traditional houses, built circular or horizontal and walls weaved from pitpit canes or bamboo, are common in villages.
Traditional housing is built in a circular or rectangular shape and the walls weaved from pitpit canes or bamboo.
Cooking is done either by using bamboos, roasting sweet potatoes in the open fire or using earth ovens known as mumu.
Monthly rainfall follows a seasonal pattern with a wet season from December to early April having mean monthly rainfalls of about 203mm to 305mm.
Eastern Highlands Province is made up of rugged mountain terrain and broad valleys.
It has low coastal areas in the Markham and Ramu valleys.
The Province's two highest peaks, Mt Tabletop and Mt Michael, are located on Kratke and Bismarck Range respectively.
They rise at a height of more than 3000 metres above sea level.
Specifically, Mt Michael is situated 3750 metres above sea level while Mt Tabletop is at 3686 metres.
Asaro and Lamari rivers both flow into the Purari, which is one of PNG's five major river systems.
The Ramu River feeds the Yonki Hydro-Power Station.
The Province is entered through the Kassam Pass and exited to other Highlands provinces at Daulo Pass.
Kassam Pass offers a picturesque view of the Markham and Ramu valleys while Daulo Pass reveals a breath taking view of Goroka's lush, green valleys.
Grasslands dominate a broad area of land especially in the valleys, which is predominantly inhabited by people.
To surmise, there’s no other place like Goroka or Eastern Highlands!
Posted by Malum Nalu at 7/22/2008 03:03:00 PM