My Dad’s memories of Michael Somare 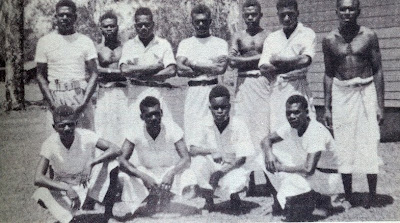 Caption: Mathias Nalu (second from right, standing), with fellow trainee teachers at Sogeri Education Centre in 1956 including Michael Somare, (third from left, sitting), Paulias Matane (sitting far right) and Alkan Tololo (standing far right).
My father, the late Mathias Nalu, until the day he died in 1993, remained committed to the ideals of his former school mate and Pangu Pati founder Michael Somare.
Dad went to school with Somare, first at Dregerhaffen in Finschhafen, and then at Sogeri outside Port Moresby.
But unlike his mates like Somare, Paulias Matane and Alkan Tololo who would one day figure in the formation of this country, Dad remained a simple school teacher, and later a primary school inspector, until the day he died so prematurely of a stroke after 35 years of distinguished service to his country.
We, his children, were born and grew up all over the country in the pre-independence days as Dad excelled as a member of the highly-disciplined and efficient ‘shorts and socks brigade’ public service under the colonial administration.
We grew up listening in fascination as Dad told us one story after another of his mates like Somare, Matane and Tololo.
Many years later, after Dad died and I was working as a journalist, I often bumped into Somare, Matane and Tololo and they always extolled the virtues of my ‘Old Man’, which left me with a great deal of pride.
One thing that is forever etched in my memory was of growing up on Sohano, a small island off Buka, in the halcyonic days of the early 1970’s, when I would have been about five or six years of age.
Papua New Guinea’s Chief Minister visited Sohano, and while reminiscing with Dad about their old days, a Bouganville Copper employee named Bill, who lived next door to us, said something that offended Somare.
Somare ordered him out of the country immediately!
I can remember as Bill, with tears, handed all his worldly possessions to Mum and Dad and left.
Independence came and I remember Dad, as we listened to the radio at 12am on September 16, 1975, celebrating as his former school mate became the first Prime Minister of the newly-independent State of Papua New Guinea.
Later, in 1976, when my youngest sister Anna was born, the Papua New Guinea Prime Minister personally visited our house while in Goroka, gave Mum K100, and said that Anna’s second name was ‘Moaso’ after his mother.
As Somare celebrates 40 years in politics, I know that somewhere over the rainbow way up high, Dad will also celebrating.
Posted by Malum Nalu at 7/28/2008 10:52:00 AM

Email ThisBlogThis!Share to TwitterShare to FacebookShare to Pinterest
Labels: My Dad’s memories of Michael Somare