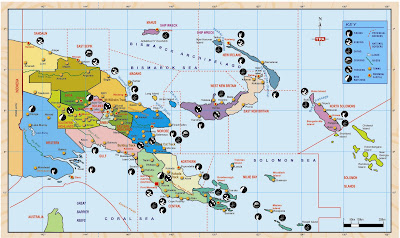 Lying just south of the equator, 160km north of Australia, Papua New Guinea is part of a great arc of mountains stretching from Asia, through Indonesia and into the South Pacific.
Papua New Guinea has a total land area of 463, 920 square kilometers and total sea area of 3.1 million square kilometers.
It has a moderate tropical climate with high levels of seasonal rainfall.
In the Highlands, temperatures can range from a low of 4 degrees Celsius to a high of 32 degrees Celsius.
The average daily temperature is 27 degrees Celsius.
Papua New Guinea’s population is about 6 million people.
This fascinating land boasts more than 600 offshore islands and more than 800 indigenous languages (tok ples), and is home to the largest area of intact rainforest outside of the Amazon.
Papua New Guinea consists of four regions made up of 19 provinces and the National Capital District, each with its own special character and cultures.
Visitors will discover a wealth of tropical scenery, from the jungle-clad mountains of the Highlands to the sandy white beaches and atolls of the coastal and island provinces.

Papua New Guineans, most of whom are Melanesians, vary widely in their physical characteristics, ethnic backgrounds and cultural types.
It is the most-heterogeneous country in the world because of the isolation of most communities.
In the past, more than 800 languages have evolved – many of which are still spoken – representing approximately one-third of the languages known in the world.
Due to the cultural diversity of the country, English is the language of Government, commerce and law.
English is a compulsory subject in school through Papua New Guinea and apart from isolated communities, is widely understood.
About 96 per cent of the population is Christian with the Catholic and Lutheran churches being the largest denominations.

In 1973 Michael Somare became the Chief Minister of a democratically-elected government and led the national to self-government on 1st October 1973.
Papua New Guinea became an independent nation on 16th September 1975 with Michael Somare being the nation’s first Prime Minister.
The National Government consists of three independent branches: the Executive, the Legislative and the Judiciary.
The National Parliament consists of 109 members, including the current Prime Minister and his cabinet of 27 ministers.
There are 19 provinces in Papua New Guinea as well as a National Capital District, each of which are given grants by the National Government to operate such functions as capital works and maintenance, health, education, agriculture, town planning, forestry and business development in their respective provinces.
However, national laws do take precedence over provincial laws if there is conflict.
Papua New Guinea is an active member of the British Commonwealth and Queen Elizabeth 11 is the Head of the State, represented by her appointed Governor-General.

Papua New Guinea is now on a sound financial path.
Economic growth looks to be around 6 to 7 per cent, following several years during which the economy contracted.
Employment and incomes are picking up.
Inflation has fallen from over 20 per cent to around 1 per cent.
The Treasury Bill rate is now under 5 per cent compared with rates as high as 20 per cent around the middle of 2003.
The Kina has been stable.
There is increased optimism about projects for investment in Papua New Guinea, which has been reflected in developments such as the billion Kina Luquid Natural Gas (LNG) projects.
International reserves are at near record levels.
The deficit has fallen and Papua New Guinea has reapid most of its debts.
Papua New Guinea has been described as a “mountain of gold floating on a sea of oil”.
While this may be somewhat overstating the situation, it reflects the importance that Papua New Guinea’s extensive natural resources play in the country’s development.
It is also appropriate, from the agricultural point of view, to describe Papua New Guinea as a “Garden of Eden”.
Fertile soils and a conducive climate allow most agricultural produce to be harvested.
At present there are two distinct economies existing side by side in Papua New Guinea: the traditional economy and the cash economy.
The traditional sector – mainly subsistence farming – supports about 85 per cent of the population.
Most villages are self-sufficient and only small surpluses of produce are available for trading.
The growth of towns has, however, encouraged small-scale cash cropping in nearby villages and these crops are sold by village people in the town market.
The cash economy in Papua New Guinea is very much an open economy geared for international trade.
Exports are mainly minerals, petroleum, gas and agricultural commodities.
The country imports most of the finished goods it requires.
The National Government actively encourages more production onshore for the needs of the population and for export.
The economy is dominated by mineral, petroleum and gas projects.
However, the agriculture, forestry, fishing and manufacturing sectors combined account for a significant proportion of the nation’s gross domestic product.
Total exports from Papua New Guinea are valued at more than US $2 billion.

Vast tracts of the country are wild and undeveloped.
The towering Owen Stanley Range, a massive central spine, divides the mainland with peaks towering over 4000 metres.
Great rivers begin their journey to the sea from these mountains, among them the mighty Sepik River and Fly River waterways.
Beneath the mountain chain, fertile coastal plains, flooded delta regions and mangrove swamps exist alongside broad sandy beaches, colourful sheltered bays and dense rainforest.
The rugged mountain terrain and deep cave systems offer wonderful adventure opportunities for walkers, cavers and climbers, and there is canoeing, kayaking and fishing on the river and delta system.
Papua New Guinea also enjoys some of the world’s best diving around its warm coastal waters, with rich coral reefs around the inland coast and the islands of the Bismarck Sea and the Milne Bay area.
Undiscovered marine life forms are continually being found on the reefs, and visitors can discover some of the world’s rarest shells.

Port Moresby is the capital of Papua New Guinea and this area is sometimes referred to as the National Capital District.
Located on the southern coast of the mainland, it has a total population of 254, 158 made up from all regions of the country and including a large foreign population.
The striking Parliament House building reflects the harmony of modern architecture and traditional design, while the National Museum and Art Gallery exhibits cultural features of the country’s complex tribal lifestyles.
There is a range of international hotels, as well as shops, restaurants, bars, nightclubs and other amenities.

The country’s pristine rainforest is home to some 700 species of birds, including parrots, pigeons, hornbills (kokomos) and cassowaries (Papua New Guinea’s largest bird), but best know is the brilliantly coloured bird of paradise.
Thirty-eight of the 43 known bird of paradise species are found here, including the rare Blue and the Raggiana varieties, enticing birdwatchers from around the world.
The world’s largest butterfly – the Queen Alexandra Birdwing – is also native to Oro Province, with a wingspan that reaches up to 30 centimetres.
Native mammals include bats and marsupials such as tree kangaroos, forest wallabies and echidnas (spiny anteaters).
Papua New Guinea is also especially famous for its stunning orchids.
Over two-thirds of the world’s known species are found here, and new varieties are still being discovered.

Papua New Guinea has more than 1000 hectares of land dedicated to national parks.
Varirata National Park (1063ha), just 42km from Port Moresby, is a haven for native flora and fauna, and birdwatchers.
The park protects the Western end of the Sogeri Plateau, across to the Astrolabe Mountains.
McAdam National Park (2076 ha) stretches between Wau and Bulolo, protecting wildlife such as echidnas, cuscuses (a large marsupial), cassowaries and birds of paradise.
The Baiyer River Sanctuary, north of Mount Hagen in the Western Highlands, contains the world’s largest collection of birds of paradise, and some shorter bushwalks.
Pokili wildlife area in West New Britain in unique for its hot springs, geysers and boiling mud pools, while Lake Kutubu in the Southern Highlands provides a refuge for birdlife, reptiles and turtles.
Posted by Malum Nalu at 7/27/2008 11:21:00 AM