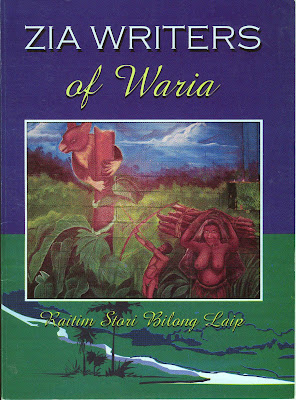 From July 10-15, 2000, in the beginning of the new millennium, a novel development took place in Unu village, along the great Waria River of Morobe Province.
Unu hosted the first writers’ workshop of the new millennium, attracting mostly villagers who started writing two years earlier when a conference on Zia language, culture and traditional knowledge systems was organised in Dona village.
Workshop participants included husbands, wives and children, medical officers, village court magistrates, non-government organisation workers, teachers, village elders and youths.
Their lowest educational standard was grade two and the eldest was about 64.
They all wrote creatively their life stories, histories, biographies and the Zia culture during the week-long workshop, which was coordinated by Zia language speaker and University of Papua New Guinea lecturer Sakarepe Kamene, assisted by his colleague Dr Steven Winduo.
The stories talk about Waria people and how their life style is fused into nature, and how it is nurtured in the rich alluvial plain of the Waria River.
They talk about the river that in ordinary times remains tame and harmless, but in the wet season runs wild like a raging boar, causing destruction and misery to people and the surrounding areas.
Some of these stories capture and exhibit the strong sense of moral lessons.
Other stories show a much bigger picture of how nature is closely linked with society and its people.
There are also stories that recount new and sometimes strange experiences when people relocate themselves into new places or situations.
From the workshop has come an 80-page book titled Raitim Stori Bilong Laip (Writing Stories about Life): Zia Writers of Waria, which was first published in 2004 by UPNG’s Melanesian and Pacific Studies (MAPS) Centre, however, is a publication that very little people know about.
In fact I had never seen or heard of the book until Dr Winduo gave me a copy as an example of recent MAPS publications.
The collection of writings by the Waria writers is the first of its kind in Papua New Guinea and could serve as a benchmark for future projects in literacy and awareness throughout the country.
“Even though it has taken a long time for this publication to come out, we hope the end product of this publication will benefit others who will read this book,” Mr Kamene and Dr Winduo wrote in the book’s preface.
“It is a publication we feel confident will stand on its own.
“The stories are written in the Zia language, Tokpisin and English.
“The use of all languages in creativity is encouraged.
“In editing this book for publication, we tried to make sure the way in which the writers expressed themselves was maintained, except for basic production issues.
“Through the initial project, we knew we had moved on from basic literacy to literacy that involves people writing their stories and lives down on paper.
“We wanted to make sure those who received literacy training used the skills acquired to transform their lives.
“In the Zia writers’ workshop, this was accomplished.
“The experience we had in running the Zia writers’ workshop and in the production of this book convince us that literacy programmes and awareness programmes must go beyond basic literacy skills.
“Literacy skills and development of these skills must be encouraged.
“Inclusion of literature and various techniques of reading and writing is a must in literacy and awareness programmes.
“This publication proves that anyone can write and have their books published.”
The Zia experience greatly touched Dr Winduo, senior UPNG literature lecture, established writer, director of MAPS, and chairman of the National Literature Board.
“In a week of enthusiasm and nerves to see that our objectives to facilitate the knowledge and skills already present in the participants’ lives accomplished our goals, we were excited that the workshop was a success,” he observed.
“The participants had begun to write their stories.
“Most of them felt that they had achieved what was impossible.
“They can now write their lives down with confidence.
“The Zia people can write their history, culture and lives in books without having to go to university to study literature or how to write books.
“In my view, these students were the most-serious ones and were able to prove to me that writing is not only for those in schools or those studying literature at the university.
“Writing was always with them!
“All they needed was a catalyst to take them one step further.”
Dr Winduo feels that what has happened to the Zia people is also applicable to other villages in Papua New Guinea.
“They village people, especially youths and women, need new kinds of training that involves skills and knowledge already present in their societies,” he says.
“Indigenous forms of learning need to be encouraged.
“Developing new ways of documenting cultural and traditional knowledge systems was the way forward.
“This is one way to renew and revive the skills of reading and writing.
“People are presented with skills of reading and writing everyday, but are never given the opportunity to use the skills to empower themselves in their way of life.”
Dr Winduo has strong words.
“In a book fair in Port Moresby, a lot of views were expressed about the right to read and write, but many people consider writing as a process that empowers individuals and people.
“Writing has the power to transform a nation’s consciousness!
“If a nation can develop its own works of literature consistently, it can continuously evaluate itself and reinvent its consciousness.”

Email ThisBlogThis!Share to TwitterShare to FacebookShare to Pinterest
Labels: zia writers of waria