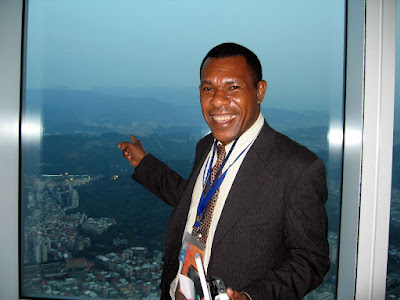 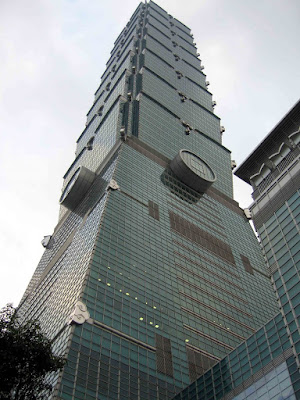 I must admit that it was a big culture shock for me when I arrived in Taiwan capital, Taipei, on the night of Sunday July 22, 2007, after a three-hour flight from Narita Airport in Tokyo.

Yes, I’d heard from friends and colleagues about the technological powerhouse that is Taiwan, but seeing is believing.

Neon lights bedazzled the night, skyscrapers were everywhere, and vehicles of every description zoomed by on super highways.

In the distance, a juggernaut soared into the sky, which I correctly presumed to be the 101-storey Taipei 101, the tallest building in the world.

I was in Taipei to attend a week-long APEC Digital Opportunities Centre (ADOC) Small and Medium Enterprises (SME) Entrepreneurship Workship funded by the Taiwanese government.

While advanced Asian countries have emphasised large corporate units, the Taiwanese economy is dominated by SMEs.

While this might seem a disadvantage, the industry is structured in such a way that clusters of SMEs can service larger enterprises.

The Taipei 101 epitomises Taiwan’s reach for the sky to become one of the most-prosperous and competitive economies in the world.

With a height of 508 metres – and 101 stories above ground and five stories – the Taipei 101 has surpassed the 462-metre Sears Tower in Chicago and the 451-metre Petronas Twin Tower in Malaysia to acquire the title “world’s tallest building”.

Designed by world-renowned architect C.Y. Lee, the exterior of the building resembles bamboo segments, with eight stories to each segment because the number “8” signifies prosperous growth.

Each segment is shaped like a sceptre, with ancient coins on the exterior of the 26th floor to give this modern building a Chinese style.

To prevent the building from swaying during typhoons or earthquakes, an 800-tonne, US$4 million, ball-shaped damper is used to dissipate lateral vibration to a spring system underneath.

For the first time in architectural history, the damping system is not hidden, but part of the building’s design.

The world’s largest damper ball has a diameter of 5.5 metres and is visible from the 88th and 89th floors.

Taiwan is one of the most-prosperous and high-tech countries in the world, and there is no such thing as poverty or unemployment.

Its “cradle to the grave” health care and education systems are rated as among the best in the world.

Everyone seems to have a mobile phone and computer, and there is wireless Internet everywhere, meaning you can use the Internet on your laptop anywhere, without the need for a wire connection.

Taiwan, in fact, is now the world leader in producing notebook computers.

Everone seems to have one or more credit cards!

The capital Taipei never sleeps and there are just so many people.

And yet, just 50 years ago, Taiwan was a resource-poor under-developed tropical island.

Through sustained good policies over the past few decades, it has lifted its population from poverty, joining the ranks of the most-prosperous and competitive economies in the world.

Unlike Korea, Thailand, Indonesia, Malaysia and Hong Kong, it was able to weather quite unharmed the Asian financial crisis in 1997.

Today Taiwan is a technological powerhouse that ranks among the world’s top producers of notebook personal computers, flat panel displays, modems, motherboards, and other electronic components and products.

In 2004 it ranked fourth globally in the production value of its IT hardware.

It is also fifth in the World Economic Forum’s 2005-2006 Global Competitiveness rankings, with a strong showing in the area of technology and innovation, ranking third in the world in the technology index.

The 2005-2006 Global Competitiveness Report highlights Taiwan’s exceptional strength in technology issues, including an impressive capacity for innovation, firm-level technology, absorption, university/industry collaboration in research, and its pre-eminent position in the use of the latest technologies, from mobile telephones to personal computers and the Internet.

Taiwan’s transition from a poor agricultural society into an increasingly-sophisticated powerhouse of high-technology manufacturing and the world’s leading producer of information and communication technology is, without doubt, one of the most-compelling development stories of the past half century.

In his case study on Taiwan in the 2004-2005 Global Information Technology Report, F.C. Lin traces the evolution of Taiwan’s ICT industry through the first economic miracle of Taiwan’s transformation from an agricultural to an industrial economy (1953-1986) and describes the second miracle of its industrial restructuring (1987-2000), when low technology industries were forced to relocate overseas and were replaced by technology-intensive industries, particularly in the information technology sector.

Lin attributes these to the following factors: strong government leadership in maintaining a high growth rate and a strong fiscal situation, manpower development with a high level of science and technology graduates, the coalescing of high-tech clusters following the model of Silicon Valley, the development of venture capital supporting hi-tech small and medium enterprises, and a highly-energetic private sector.

He identifies the future challenges as breaking into the advanced industrial and research areas of application integration, technological innovation, and standards formulation as global competition reduces profit margins.

In addition to manufacturing them, Taiwan is already moving fast to adopt ICT.

The Institute for Information Industry (III) estimates that there were 8.92 million Internet users in Taiwan as of June 2004, with an Internet penetration rate of 39 per cent, growing 2 per cent the previous year, and showing signs of reaching saturation.

About 12.2 million people, of 54 per cent of Taiwan’s population, were general Internet users – slightly more men (56 per cent) than woman (52 per cent).

Papua New Guinea can learn so much from the Taiwanese experience if we are to take our place in this ever-changing world.
Posted by Malum Nalu at 8/03/2008 03:31:00 PM

Email ThisBlogThis!Share to TwitterShare to FacebookShare to Pinterest
Labels: Memories of Taiwan