Dead fish a cause of concern for Western province villagers 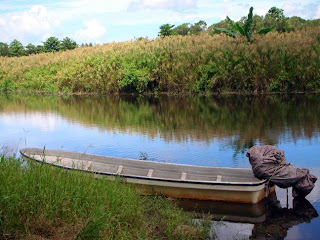 The is a major source of fish for the Iruupi villagers of Western province. Picture by MALUM NALU.

Villagers from remote Iruupi village in the Western province have complained to Governor Bob Danaya about dead fish being found in the .

They raised their concern in a letter to Mr Danaya last Thursday (September 25) and asked the Governor to send in experts to ascertain the exact cause of the fish dying.

They believe that the fish could be dying because of oil or petroleum substances in the river.

“We wish to make known to you sightings of dead fish numbering up to 200-plus dying nearly everyday and floating in the river system of ,” said ward 14 council member in the Oriomo-Bituri rural local level government Goba Biange, acting chairman/treasurer of Naga Bewani Resource Association Siwida Rumi and association secretary Kapena Memafu.

“The sightings of these dead fish began last month and are getting worse nearly everyday.

“We have made requests to the administration several times to send an assessment team to assess the dying garden crops but nothing has since been done.

“It has now happened to the river system.

“We are suspecting leakages of oil or petroleum substance in the river system that is killing the fish.

“The tide in the river has been normal and there has been no flooding since the beginning of this year.

“We are very worried because our livelihood has been taken away by this unknown mystery.

“Please send us experts in the field of petroleum to investigate and report accurately the findings.”

Copies of the letter were also sent to South Fly MP Sali Subam and the Departments of Petroleum and Energy and Environment and Conservation.

Email ThisBlogThis!Share to TwitterShare to FacebookShare to Pinterest
Labels: Dead fish a cause of concern for Western province villagers