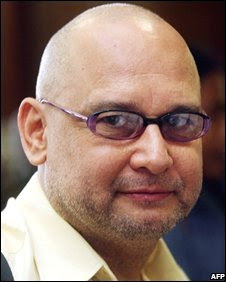 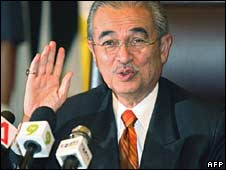 Mr Abdullah has insisted he will remain in office

A prominent anti-government blogger in Malaysia has been detained for two years on charges of insulting Islam, BBC reports.
Raja Petra Kamarudin has been held without trial under controversial internal security laws which could see him detained indefinitely.
He was arrested on 12 September as part of a crackdown on dissent by the Malaysian government, which is facing a mounting challenge from the opposition.
Raja Petra's lawyer said the order was "a big blow" to civil liberty.
The BBC's Robin Brant in Kuala Lumpur said the well-known blogger had been a thorn in the side of the Malaysian government, using his blog to become one of its most vociferous critics.
Raja Petra, himself a Muslim, was accused of insulting Islam and inciting racial tensions through an article he published on the Malaysia Today website.
The charge is highly sensitive in multi-ethnic Malaysia.
The arrest came shortly after he used his blog to accuse Malaysia's Deputy Prime Minister, Najib Razak, of involvement in the 2007 murder of a Mongolian woman - a charge Mr Razak strongly denies.
Shortly before he was arrested Raja Petra told the BBC that he was not afraid of detention but wanted "to be available to help in the dissemination of information that is going to be greatly required".
'Worst news'
Mr Abdullah has insisted he will remain in office
The blogger has been sent to a detention centre in the state of Perak by order of Malaysia's home minister.
Marina Lee Abdullah, his wife, told AFP news agency: "This is the worst news I can receive, but we will keep fighting for his release."
His lawyer, Malik Imtiaz Sarwar, said the order was "definitely a big blow to the idea of civil liberties, especially in a climate when everybody is asking for greater rights".
Raja Petra was one of three critics of the government arrested in what the opposition said was a sign of panic by the embattled administration of Abdullah Badawi.
Mr Abdullah's government suffered an unprecedented drop in support in the general election earlier this year and he has faced calls to resign from both opposition and some members of his own party.
Last week he rejected claims by the opposition, led by Anwar Ibrahim, that they had enough support to overthrow him, saying he was "here to stay".
Mr Anwar recently won a landslide victory in a by-election - returning him to parliament after a decade's absence.
He was sacked as deputy prime minister in 1998, and jailed for six years for sodomy and corruption - allegations he has always denied.
Controversial
Under the controversial Internal Security Act (ISA), Raja Petra can be held for two years, a sentence which can be renewed indefinitely.
The order can only be overturned by the home minister, not a judge.
Political groups both within the ruling government coalition and outside it have criticised the ISA and the inherent potential for abuse.
A member of the cabinet, Zaid Ibrahim, resigned last week over the government's use of the act, saying it "should only be used on armed terrorists or those out to topple the government by force".
Opposition MP Teresa Kok was detained for one week under the act after she was accused of campaigning for a mosque to lower the volume of its call to prayer.
Another blogger, Syed Azidi Syed Aziz, and Chinese-language journalist Tan Hoon Cheng, have also been held under the ISA.
Raja Petra's detention is likely to lead to further criticism of the Malaysian government, both domestically and internationally, says our correspondent.
Posted by Malum Nalu at 9/25/2008 11:32:00 AM