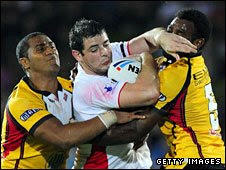 England were probably a little surprised by the enthusiasm shown by the Papua New Guinea team in Saturday's World Cup opener but despite the narrow margin of victory, it was a great workout for Tony Smith's side.

PNG showed up strongly and were really close to causing a major upset. But at the end of the day for it was about getting the win and the points in the group.

It was a nervous and anxious night for supporters but their team showed enough composure and patience in the second half to get the win.

When Tony Smith sits down and has a look back at the game, he will think it was what needed. They can use that performance as a template for the next games in the competition and improve against next weekend.

PNG probably played to their full potential but are smart enough to recognise that they cannot afford to play as they did here in Townsville against and . I'm sure the Australian media will give them a hard time over this result but that's the nature of the beast.

The fact that were not at their best is probably a good thing at this early stage of the competition. It is important to remember that it's not how you start - it's how you finish - and they could have three or four more games to play as the tournament goes on.

The defence looked a bit rusty but you could expect that. You are going to get caught with a couple of things you probably would not do when you are completely on your game.

The game and the result will help wake up and make them recognise that this competition is alive and vibrant and you are not going to walk over anybody in it.

Tony Smith will probably be a bit relieved because all coaches have horrible nights when the bounce of the ball does not go your way and you commit more errors than you would like to, but he will be pleased with the win.

There was a fantastic atmosphere in the stadium with the locals backing the Kumuls and they responded with great enthusiasm.

For PNG, the Hull KR duo of Stanley Gene and Makali Aizue were outstanding, as was their hooker Charlie Wabo, who came on from the bench and did some great things.

Stanley, who led his side superbly, belies the years and keeps putting in superb performances. He's done it for Hull KR a couple of times this season and who knows how long he can go on for?

It's alleged that he has four passports where his age ranges from 44 to 34 and his true age is probably somewhere in between. Having coached him at for a year, I've seen a passport with 42 on it!

I think PNG really fancied turning over here and that's what made for such an exciting game.

This may have been their best chance to beat one of the big three teams. and may not see as much enthusiasm from the Kumuls as we saw here.