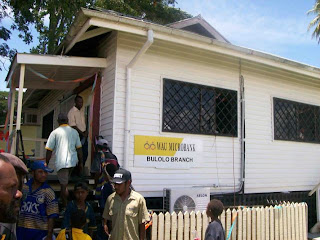 Banks in Bulolo, Morobe province, are gaining momentum as business picks up as a direct result of the exploration and mining boom in the area.

The two banks in the area are Nationwide (formerly Wau) Microfinance and Bank South Pacific.

Nationwide Microfinance, in particular, has picked up dramatically since it was opened in Bulolo last February 26.

“Within this short space of time there has been a lot of cash circulating within within the townships of Bulolo and Wau due to mining activities as well as alluvial mining,” manager Jacob Bigiglen said

“Within the three months we’ve seen that people have cash to spend around.

“You find that ordinary people in Wau, Bulolo, Watut, Menyamya and Garaina come and open accounts here to keep their money.

“We give loans to people to buy vehicles especially.

“Within this short space of time you will see that a lot of people have new vehicles due to assistance from us.

“We have microfinance loans which we give to small businessmen involved in trade stores and other little activities that they use to create income.

“We also give salary loans to employees of mining companies like Niuminco ( ) and Harmony (), PNG Forest Products and public servants.

“Then we go down to cash back loans which we give to ordinary people who save with us.

Mr Bigiglen said that when the mines were in full operation more people, especially landowners would come in.

“We have 731 people who have taken out loans.

“Within the next one to two years, we should see more employees coming in and small business growing.

“We are also talking with Wafi landowners about how we can help them.”

Mr Bigiglen, however, said that government support was essential if business was to prosper.

“We are looking at the government to improve infrastructure like roads,” he said.

“The law and order problem also needs to be controlled.

“If the government assists the private sector, the benefits will flow down to the people.”

“We are trying to get the companies to open their operating accounts here,” he said.

“Otherwise, when business booms, the economy picks up, and the workforce and people at large will come in.

“Otherwise, we will have to wait for 2009 when will start production.

“That’s when we really expect to pick up business.”