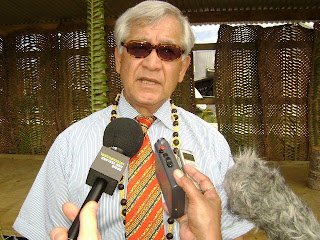 Mr Slade, from Samoa, was appointed by Pacific Islands Forum Leaders during the 39th Leaders’ Forum in in August to replace former Secretary General the late Greg Urwin who passed away on 9th August.

Mr Slade is the first Samoan to lead the region’s premier political organisation since it was founded in August 1971.

A lawyer by profession, Mr Slade has held several positions in the legal fraternity including a Judge, in the International Criminal Court in , (2003-2006); Assistant Director, Legal Division in the Commonwealth Secretariat in (1983 – 1993), and Attorney General of Samoa (1976 – 1982).

He was also Acting Chief Justice of Samoa for interim periods.

Mr Slade was also Samoa’s Ambassador and Permanent Representative to the United Nations, New York and concurrently Ambassador to the United States of America and High Commissioner to Canada from 1993 – 2003.

He is also a recipient of the Global Oceans Leadership Award (2003), the Elisabeth Mann Borgese Medal for services to small island developing States and oceans (2003) and a Laureate of the Elizabeth Haub Award for Environmental Diplomacy.