The times they are a'changin' for Bulolo 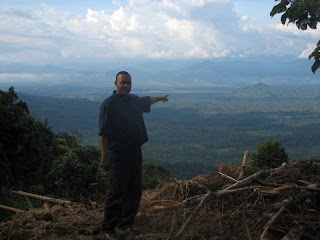 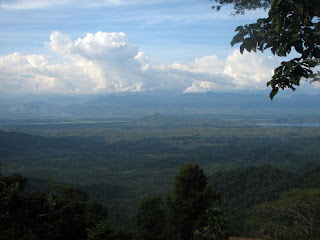 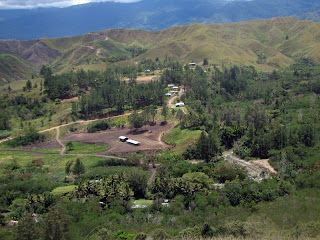 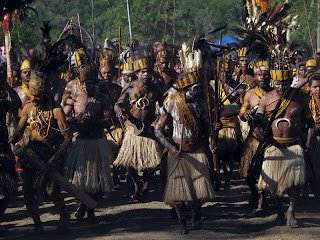 There is a breathtaking view of the , and stretching all the way to Lae along the in Morobe province.

I took the drive along this road, which has been neglected for the last seven years, together with Bulolo MP Sam Basil last Friday and was so taken in by the panorama which unfolded before our eyes.

White cockatoos, hornbills and other birds abound in this forest area surrounded by picturesque hills, rivers and creeks,

“I plan to set up a lookout at this point, together with a barbeque area, where families from Lae can come and relax and have a good time at the weekend,” he says.

“There is so much potential for tourism in this area.”

I visited parts of Bulolo last week with Mr Basil and he showed me so many areas with tourism potential as well some of his projects in his local level government (LLG) areas.

Indeed, as Bob Dylan sings,’ the times they are a’changin’ for Bulolo

Gabensis is a typical village along the while Muniau is in the Buang LLG of Mr Basil’s Bulolo Electorate.

The people of Buang have suffered for several years because of the state of this road.

They have had to travel all the way to Mumeng and then turn off to Buang instead of having the luxury of this shortcut.

Reconstruction of the road comes under the Bulolo District Road Maintenance Programme initiated by Mr Basil.

“We plan to have this short cut road reconstructed before Christmas so that Buang people from all over the country can go home and spend time with their families,” he says.

“We have advertised and we have got a manager on contract, who is running the project at the moment.

“We have Team A and Team B.

“Team A is in Watut reviving the rural roads there and in November will move to the .

“Team B is doing the shortcut from Gabensis to Buang.

“It’s doing gravelling and culverting at the same time.

“The programme has a contracted manager who has a degree in architecture and building,” Mr Basil explains.

“It has Team A and Team B consisting of plumbers, electricians, bricklayers and carpenters with a provision to hire four villagers wherever a project is.

“In the programme, if a school had K100, 000 to build a classroom, be guranteed that 40% of that money will not go to a contractor.

“I am delivering services to my electorate using the private sector approach minus the profit factor, therefore, maximise the supposed-to-be-profit for more service rollout.

“When gained independence, everyone’s focus was on districts.

“Wau/Bulolo Urban is where the district administration is, so when previous MPs bought vehicles, they were for the urban areas while the rural areas were neglected.

“This meant that the district chewed up everything while the LLGs suffered.”

Last Thursday, we visited remote Upper Watut LLG where Mr Basil opened a footbridge and a new double classroom, and then delivered a new ambulance at Mainyanda government station.

“I’m putting an ambulance into all LLGs so that they can all have access to this service,” he tells me.

“I’ll be issuing ambulances for the next four weeks.

“And then we have tractors which will have plowers for agricultural use, slashers for cutting grass, grading blade for grading roads and a trailer for carrying coffee bags, gravel and utility use.

“These will be use free of charge for government services while there will be a user-pay policy for private users to cover fuel.

“Remember the 1970’s when government services were so good?

“In those days, stations were alive, clean and well-maintained.

“We want to do the same in the Bulolo electorate now.

“This is the very basic fundamental, which is putting government into the LLGs.

“I’m issuing an ambulance to first, followed by Mumeng, Buang and then Wau Rural.

“Waria doesn’t have a road; therefore, I’m allocating money to build a road first, from Biaru to Garaina.

“For Wau and Bulolo towns, I’ve already given them two garbage trucks to collect rubbish and generate their own revenue.

“In November, they will take delivery of their new grader.

“It will spend a week every month in Wau and Bulolo towns, and then rest for two weeks.”

Rural electrification is another major project with 42 houses already lit up, from the main grid from Baiune, and 10 more houses to follow before the end of this year.

“PNG Power will send in a surveyor upon my request for Sambio village and Bayevaga village,” Mr Basil says.

“The power will come from the main grid from Baiune hydro-electricity in Bulolo.”

And then there’s the marvel of instaneous telephone and Internet communications.

“We’ve already opened up the Mapos Parish with a VSAT installation.

“There are six lines.

“We are running five lines from the installation vicinity, a few kilometres apart.

“Telephone lines are installed next to shops so shop owners take ownership of it.

“We compensate the shop owners by signing them up as wholesale buyers for Telikads by buying them 10% cheaper.

“Buang is already connected by VSAT, but still to be officially opened.

“, likewise, has already installed VSAT but this is still to be officially opened.

“By 2012, all people in Bulolo electorate will have access to telephone services, via VSAT.

“We are embarking on purchasing 15 more units for installation next year at a cost of K1 million.”