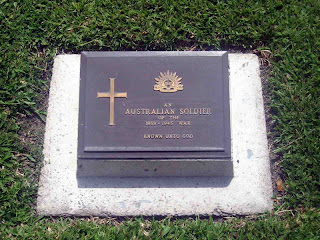 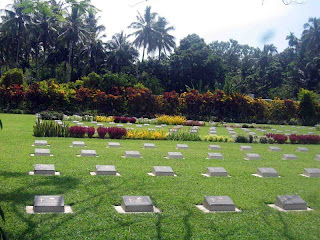 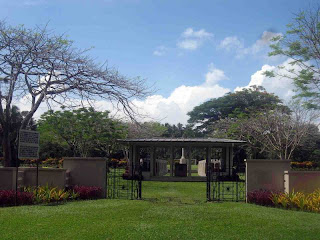 I visited , not far from Rabaul, province, last weekend.

This peaceful and beautiful cemetery contains the graves of over 1, 000 Allied war dead and the Rabaul Memorial commemorates those who have no known grave.

The cemetery is maintained by the Office of Australian War Graves, Department of Veterans' Affairs, on behalf of the Commonwealth War Graves Commission.

It is located near the site of the first Australian action of World War I when the Australian Naval & Military Expeditionary Force (AN&MEF) captured a German wireless station on September 11, 1914.

Each grave is marked by a bronze plaque set on a low concrete pedestal with 500 marked 'Known to God'.

As well as Australians, the cemetery contains the graves of Indian and British prisoners of war who were transported to by the Japanese as a labour force.

The peace of the setting and the enormous number of white crosses shocked me with the contrast.

It was here that I began to grasp the sacrifice made by those who give their lives for their country.

respects and honors those who made the supreme sacrifice for their people.

It also serves as a reminder that war kills, not just a few, but many hundreds of thousands, and on both sides.

Bitapaka – like other war cemeteries in – offers an opportunity to create goodwill amongst all the living so that the same tragedies may not be repeated.

It creates strong feelings of sacredness, tranquility, spaciousness, peace and beauty, and is immaculately maintained by devoted staff.

Bitapaka is a village in which, in 1914, was the site of a German radio station and thus a target for the troops of the AN&MEF.

After landing at Kabakaul on the morning of September 11, 1914, troops from the AN&MEF were involved in a series of skirmishes with German forces, mostly local Melanesian troops, along the track to Bitapaka.

The radio station was finally secured at 7pm at a cost of seven Australians killed and five wounded.

One German and 30 Melanesians had died in the effort to defend it.

Of these, 35 are British, 420 are Australians, one is a New Zealander, 614 are Indians, 34 are Fijians, two are Western Solomon Islanders, and five are Allies.

The memorial commemorates 1,113 Australian soldiers, 104 airmen and eight Papua New Guineans who have no known grave.

The Indian soldiers were prisoners of war from the Malayan Campaign, while the remainder of the burials and all the names on the memorial are of men who died in and .

The cemetery also contains 28 burials of WW1: 27 Australian and one British.

The cemetery and memorial were constructed and are maintained by the Commonwealth War Graves Commission.