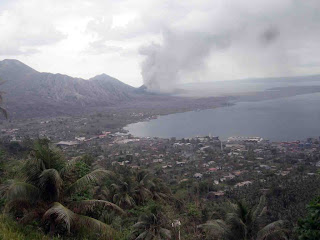 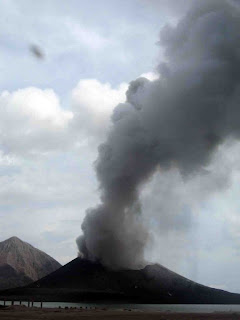 Tavurvur Volcano in Rabaul, province, continues to send out ash and steam.

A visit to the volcano last Saturday saw it making belching noises like a mammoth jet engine and continuing to send out ash over Rabaul.

The area near the volcanoe is eerie and like a moonscape, however, people stubbornly persist and continue to live in Rabaul.

The town was the provincial capital and most important settlement in the province until it was destroyed in 1994 by falling ash of a volcanic eruption.

After the eruption the capital was moved to Kokopo, about 20km away.

Rabaul is continually threatened by volcanic activity due to being built on the edge of Rabaul caldera, a flooded caldera of a large volcano.

The eruption shattered windows in the town, and lava flows reached the sea

On November 20 this year, Tavuvur released a spectacular plume of ash and steam, and the Moderate Resolution Imaging Spectroradiometer (MODIS) on NASA’s Aqua satellite took a picture the same day and posted it on its website http://earthobservatory.nasa.gov/.

In this image, a dingy gray plume blows westward over the from the volcano’s summit.

The plume differs from the nearby clouds in both its darker color and more diffuse shape.

Email ThisBlogThis!Share to TwitterShare to FacebookShare to Pinterest
Labels: Rabaul