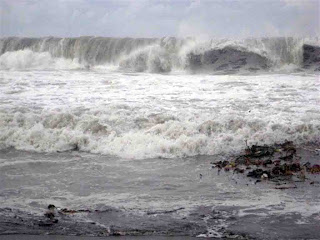 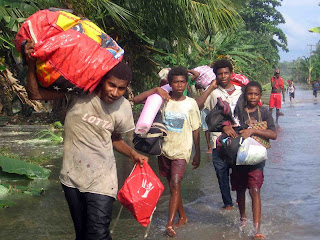 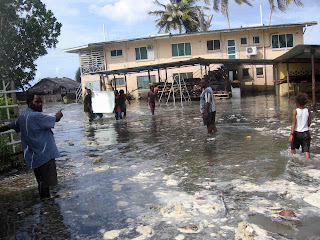 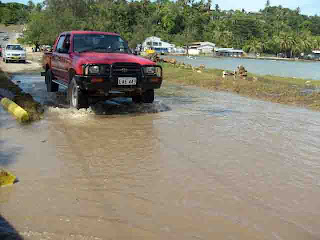 It was a wet, wet, wet 2008 Christmas for over 30, 000 struck by severe sea swells in the maritime provinces of Papua New Guinea.
Severe sea swells were reported in New Ireland, East Sepik, Manus, Bougainville, West Sepik, Morobe and isolated parts of Madang.
A majority of the affected populations were found in Manus, East Sepik, New Ireland and Bougainville.
New Ireland reported 118 internally-displaced persons when the population on Tench Island had to be evacuated to neighboring Emirau Island with some Tench islanders, especially students, taken back to Kavieng.
New Ireland also reported the most number of houses damaged or destroyed.
This year will be the second year in two years when disaster struck at about the same time.
In November 2007, Tropical Cyclone Guba devastated Oro province, leaving thousands homeless with major infrastructure including roads and bridges washed away.
The maritime provinces are not an isolated case as parts of the Highlands region also had their fair share with landslides along the Simbu section of the Okuk Highway, which cut off supply routes to Western Highlands, Enga and the Southern Highlands.
Unlike the Oro experience, no state of emergency was declared in the maritime provinces.
In fact, this event and its aftermath were managed as a national disaster under the auspices of the Disaster Management Act.
The Government of Papua New Guinea (GoPNG) coordinated disaster response activities through the National Disaster Centre in Port Moresby and the respective provincial disaster centres.
Minister responsible for disasters Job Pomat MP, chairman of the national disaster committee Manasupe Zurenuoc, and acting director of the National Disaster Centre Martin Mose were instrumental in coordinating GoPNG, donor, and both NGO and INGO assistance.
Provinces coordinated disaster response activities in partnership with the National Disaster Centre and through their provincial disaster centres, and under the leadership of their provincial administrators.
A majority of the response agencies worked through the provincial disaster centres.
Disaster response activities were supported by UN agencies, AusAID, USAID, NZAID, and JICA. Response agencies included provincial administrations and provincial disaster centres, the PNG Red Cross, and national and international NGOs such as CARE, WVI, SC, Oxfam, ADRA, and Caritas PNG.
All agencies were also involved in undertaking damage and needs assessments.
On December 17, 2008, Mr Zurenuoc expressed confidence in the way provinces had managed their response activities and hinted to the media cease of the response phase sooner than expected.
At a small ceremony on December 22 to receive emergency relief items from the Japanese Ambassador H.E. Hajime Hishiyama, Mr Zurenuoc announced the end of disaster response and encouraged partners to shift to early recovery.
Although this year’s sea swell disaster was short lived, its effects were extensive as can be seen by the demand for rehabilitation and reconstruction activities in New Ireland and Manus.
As soon as sea swells hit, the National Disaster Centre received firsthand reports on December 9, 2008, from witnesses in Kavieng, Buka, and Bogia in the Madang province.
Each province has a provincial disaster committee with the provincial administrator as chairperson.
In some provinces, this committee went to work immediately and operated out of its provincial disaster centre.
The National Executive Council met on December 11, 2008, and approved up to K50 million, with which K20m was to be made available for disaster relief, response, and recovery purposes.
The K20m was released to the Department of Provincial and Local Government Affairs on December 14, 2008.
This amount was later transferred to the National Disaster General Trust Account after scheduled closure of all government accounts on December 16.
Affected provinces have now begun drawing down on this funding, and in close consultation with the National Disaster Centre.
Provinces have done so after providing extensive damage and needs assessment reports together with an expenditure budget.
Posted by Malum Nalu at 12/30/2008 06:20:00 PM