A young man with a 'green' ambition 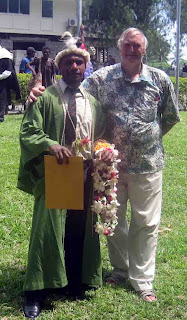 Young Elizah Kone from the Chimbu province, who graduated with a diploma in tropical agriculture last Friday from the of in province, is eagerly looking forward to making a big contribution to the industry.
He has been sponsored by major agricultural company Alele Farm Fresh Produce since Grade 12 at in Chimbu in 2004.
Alele general manager Graeme Ross last Thursday walked down to Popondetta from the mountains of , jumped on a plane to , and then got on another to Rabaul to see his protégé graduate.
Mr Ross has big plans for the young man, including further training in Australia, so that he can hopefully become Papua New Guinea’s first certified seed inspector.
He is already well-versed in extension work, Potato Late Blight and quarantine, among others, as a product of Alele.
“Alele has sponsored me for three years,” a beaming Mr Kone said at Vudal.
“During my practical breaks, I’ve been working with them, especially in extension.
“We’ve been training farmers on Potato Late Blight.
“We’ve also been teaching farmers about quarantine measures.
“Most of our training has been on safety.
“This has been taking place in the rural areas where most of the farmers are.
“The major achievement for me has been helping to bring back the potato industry into the country, after the Potato Late Blight disease.
“I’ll be going down to to be trained as a certified seed inspector because we don’t have a certified seed inspector in the country.
“After that, I’ll be concentrating on tissue culture, because right now we can’t afford to import seeds into the country and bring in disease.
“Graeme Ross has put a lot of trust in me and I can’t let him down because I see that his aims and visions are for the majority of people in the villages, who have no access to government services.
“We are supposed to be collaborating with government agencies like National Agriculture Research Institute, Fresh Produce Development Agency, and National Agriculture Quarantine Inspection Authority; however, because we don’t get the full support we need, that’s when the problem comes in.
“I see that what we are doing is more than the government agencies because we are reaching people in the very-remote areas.”
Mr Ross recalled that Mr Kone’s father approached him in 2004 to sponsor his son for agricultural training
“We sponsored him 100%,” he said.
“He had high marks and management capabilities.
“He has an outgoing attitude and was very keen on agriculture.
“His father worked with Chemica in chemical marketing.
“Through his training process, we had always kept him conversant with the company’s development programme.
“We want to promote him into new developments for agriculture at farmer level.
“That shows that we want to him into as much training as possible.
“Our priority at Alele is to do away with chemicals and try to find natural means of controlling environmental problems, such as pests and others.
“What we would like to see is him experienced in all aspects of commercial vegetable production, including overseas training, so that he will be able to contribute meaningfully to fruit and vegetable production in the future.
“We would like to help a lot of young people, and one of the ways we’re doing that is through practical training of students.
“As a private sector, we call on other private sector agricultural industries to support practical training for students with organisations such as universities.
“We’re very enthusiastic about PNG’s agricultural industries, especially in the food industries, which are very important developments within the economy.
“We have found that the dedicated students appreciate the exposure to the practical workforce.
“We also have an interest to see how these students progress in their lives.”