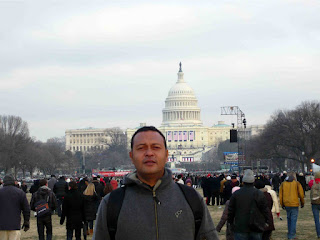 Bulolo MP Sam Basil (pictured above in with Capital Hill looming in the background) has welcomed moves by the National Alliance party for its national ministers to give their respective performance reports to the party executive.

Opposition MP Mr Basil, who is in the to attend the inauguration of Barrack Obama as US President as well as tour the country, made the call after reading the online version of The National yesterday.

“If the intentions are good, then I welcome the move wholeheartedly on behalf of my people in Bulolo district,” he said in a statement emailed from .

“Appointment of ministers too often has been regarded as reward from the ruling party to its party members and the coalition for successfully providing their numbers to form   government.

“Because many of our urban/rural population are not educated enough and do not have access to the media, they cannot monitor their MPs, including the Government and its ministers’ performances, therefore, cannot effectively demand or pressure for their performance.

“This must change now.

“Services are not flowing into the rural areas, such as health, which is currently the worst affected followed by other departments that need not to be mentioned.

“Corruption also finds its place in departments if the ministers are not focused in their core responsibilities.

“What the National Alliance Party has demanded from the ministers must be set as a good precedence to all political parties: if you can’t perform there is always another MP who can do the job.

“It will also play a part in effective delivery of services while elevating the performances of the ministers to another scale.

“However, if this request is basically cooked up for reshuffle purposes only, then it may bring along with it a lot of questions of integrity and trust among the coalition partners and fellow party members.”