Comeback for Winnie the Pooh after 80 years 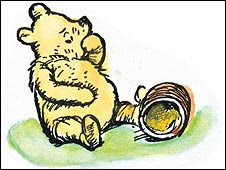 The late AA Milne's beloved children's character Winnie the Pooh is set to return to bookshelves, 80 years on from his first literary appearance, BBC reports.
The Bear of Very Little Brain will make his comeback in Return to the Hundred Acre Wood, the first authorised sequel to Milne's original 1920s stories.
The book - written by David Benedictus with illustrations by Mark Burgess – was out in the UK and US last October 5.
The new book has the blessing of the A A Milne and E H Shepard Estates.
Shepard, who died in 1976, drew the famous illustrations for Milne's 1926 book Winnie-the-Pooh and its 1928 follow-up, The House at Pooh Corner.
In December a collection of his original drawings fetched £1.26m at auction in London.
"We have been hoping for a good many years that we might one day be able to offer the world a sequel which would do justice to the original Winnie-the-Pooh stories," said Michael Brown of the Trustees of the Pooh Properties.
"The original books were one of the greatest celebrations of childhood in any language, but we believe that David Benedictus and Mark Burgess have captured the spirit and quality of those original books.
"We hope that the many millions of Pooh enthusiasts and readers around the world will embrace and cherish these new stories as if they had just emerged from the pen of A A Milne himself."
Benedictus, who adapted and produced audio adaptations of Winnie-the-Pooh starring Dame Judi Dench, Stephen Fry and Jane Horrocks, said it was an "honour" to have his sequel approved.
"I hope that the new book will both complement and maintain Milne's idea that whatever happens, a little boy and his Bear will always be playing."
Return to the Hundred Acre Wood will be published by Egmont Publishing in the UK and by Dutton Children's Books, an imprint of Penguin Young Readers Group, in the US.
Alan Alexander Milne, who died in 1956, based the Christopher Robin character on his own son.