Dressed for a party! 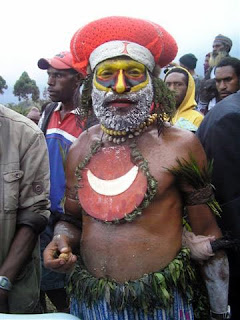 Kogl Kara Elementary School teacher Peter Kunjil was all dressed in his traditional attire and had his face painted in Mul-Baiyer, Western Highlands style, to mark the occasion of project launching and distribution of new vehicles to the Mul-Baiyer Lumusa district.
Mr Kunjil, from Bukapena village, was among several others who decorated themselves in traditional attire and performed traditional dances to color the event.
Mul-Baiyer MP and Internal Security Minister Sani Rambi initiated the launch of several projects and distributed nine vehicles to schools, health centres and district administrations.