In search of the perfect wave in Papua New Guinea 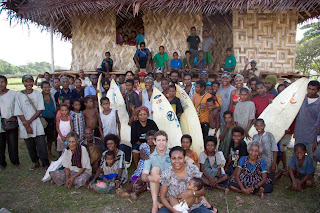 Caption: Locals with SAPNG executives during the presentation of surf boards to the club by SAPNG.

Little known in the Madang province is gearing up for its first international visitors from on February 27,  2009.

A team of Japanese surfers with a film crew are touring ’s three premier surfing destinations commencing February 22,  2009 starting in Lido village, Vanimo, and arriving in Madang on 27 February 2009 where they will spend four days until  March 4, 2009.

Their tour ends in on  March 8.

The visitors will be spending three to four days on each location riding waves besides meeting people, filming and learning different cultures.

The project is a combined surf tourism project between the Surfing Association PNG and PNG Tourism Promotion Authority  which the SAPNG is very grateful for their continued support in the expansion of the SAPNG surf tourism program throughout PNG to help empower the village communities to ensure and equitable and sustainable future for the people who wish to embrace the sport of surfing and surf tourism industry for the collective benefit of their communities.

President of Surfing Association of PNG, Andrew Abel recently spent four days at Tupira Surf Club, Madang’s own first surfing destination, to check on the preparations of the work undertaken in readiness for the Japanese visit.

Mr Abel was accompanied by his wife Margaret and son, Cheyenne, senior executive members of the association, Mr Richard Farrell, Secretary of SAPNG with his wife, Lyn, and child and SAPNG Contest Director, Jason Pini.

Mr Abel and team were quite impressed by the progress of the work and the efforts that the executive committee and the community were committing to this project.

This was Mr Abel’s second official visit to Ulingan in a space of eight months since he first launched Tupira Surf Club on April 12, 2008 and declared Ulingan as ’s eighth surfing spot and Madang’s first.

On this visit Mr Abel donated a further five surfboards to Ulingan surfers and urged the community to take care and use them properly.

He also promised the Club further surf boards from the Japanese visiting surfers and more from the donated boards awaiting shipment from .

Mrs Verna Mom, Vice President of Tupira Surf Club received the boards on behalf of the members and thanked Mr Abel and SAPNG in the presence of close to 150 people gathered to witness the occasion.

The boards will be shared between Tupira and one of its affiliated surfing sites.

Mr Abel was overjoyed by the quality of waves and surfs in Tupira which were as good as any place in the world.

He said that the consistency of the waves and the commitment of the people to realise their aspiration of establishing a surfing destination in their area clearly projected Ulingan as one of the best surfing sites in the country.

He assured those gathered that Ulingan presented itself as the ideal location for the next National Championships to be hosted by Tupira Surf Club.

For further information on surfing in PNG, log on to www.surfingpapuanewguinea.org.pg.