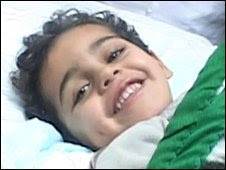 Four-year-old Samar Abed Rabbu (pictured) is a little girl with a captivating smile to melt the heart of the most hardened correspondent.

Samer's two sisters did not survive the attack

When we first came across her in the hospital in the Egyptian town of El-Arish, just over the border from Gaza, she was playing with an inflated surgical glove beneath the covers.

The doctors had puffed air into the glove, trying to distract her from the further pain they had to inflict inserting a drip.

Samar had been shot in the back at close range. The bullet damaged her spine, and she is unlikely to walk again.

At her bedside, her uncle Hassan told us the family had been ordered out of their home by Israeli soldiers who were shelling the neighbourhood.

A tank had parked in front of the house, where around 30 people were taking shelter.

The women and children - mother, grandmother and three little girls - came out waving a white flag and then, he said, an Israeli soldier came out of the tank and opened fire on the terrified procession.

Samar's two sisters, aged seven and two, were shot dead. The grandmother was hit in the arm and in the side, but has survived.

One of the most alarming features of the conflict in Gaza is the number of child casualties. More than 400 were killed. Many had shrapnel or blast injuries sustained as the Israeli army battled Hamas militants in Gaza's densely populated civilian areas.

But the head of neurosurgery at the El-Arish hospital, Dr Ahmed Yahia, told me that brain scans made it clear that a number of the child victims had been shot at close range.

Samar's uncle said the soldier who had shot his niece was just 15m (49ft) away. ''How could they not see they were shooting at children?'' he asked.

When we finally got into Gaza, we tried to investigate further.   There are no houses left - no mosques, no factories, and no orchards

Finding a house, even with an address, in a neighbourhood that has been bombed into oblivion, where all landmarks have been obliterated and even the locals cannot find their bearings, is not easy.

But we eventually met a man who knew Samar's family and took us to the family house, or what was left of it.

The four-storey building has been concertinaed to the ground.

Khalid Abed Rabbu wears on his face all the pain of Israel's bloody three-week campaign in Gaza. In his hand he carried the teddy bear that had belonged to his daughter, Samar's six-year-old sister.

Its head had been blown off, apparently in the same burst of gunfire that had cut his daughter in half.

He described the events of that night almost identically to his brother. There were minor discrepancies, but he too believes his daughters were shot in cold blood.

Khaled Abedrabou found toys in the wreckage of his house

"There were soldiers leaning against the tank eating crisps," he said. "But then one of them jumped down and walked towards the house with an M16 automatic rifle."

He showed me a photo of his eldest daughter under shrouds in the mortuary.

"What has my family done to Israel," he cried. "What has Samar done to deserve all this pain?"

We have put the family's allegations to the Israelis. So far they have told us that they can not comment on specific cases.

Their spokesman said they had made every effort to limit civilian casualties but were fighting a terrorist organisation that often uses the civilian population as cover.

The Israelis say is evidence that on many occasions when civilians were killed their troops had been responding to incoming fire.

There are reports of the neighbourhood where the family lived, known as Ezbat Abed Rabbu, had been used by militant fighters in the past. During an incursion in the spring of 2008 the Israelis took over Khalid's house for two days.

But Khalid insists he is not Hamas, he is not a fighter. He said he worked for the Palestinian Authority and is a member of Fatah, Hamas's political rivals.

"There were no fighters here," he added, picking up crisp bags printed with Hebrew lettering that the soldiers seemed to have left behind. "Do you think soldiers eat crisps sitting on their tanks when there is incoming fire?"

Samar's father and her uncle have not spoken to each other since she left Gaza for treatment in Egypt, yet in separate interviews they told us the three girls were outside the house, in plain view, when they were shot.

We toured the part of Jabaliya where the Abed Rabbus lived. In an area that must cover at least a square mile, there are no houses left - no mosques, no factories and no orchards. The entire neighbourhood has been devastated.

It may be true that fighters were hiding in the alleys of Jabaliya. It is possible that rockets were being fired from here towards Israel.

But for the people who lived here, this is a story of wanton destruction. The world must now decide whether the Israeli action here was justified under the rules of war.