Bulolo MP to sort out issues with MMJV 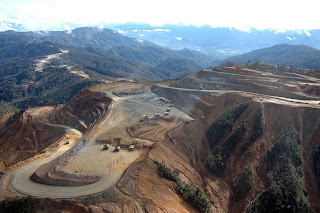 An aerial view of the Hidden Valley Mine Project area stretching down to Hamata. Picture by SIMON ANAKAPU of MOROBE MINING JOINT VENTURES.
Bulolo, Morobe province, with the Bulolo River snaking through the town. Picture courtesy of PNG Forest Products. 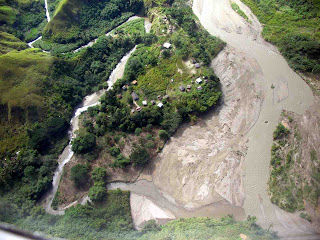 The Bulolo River...MP Sam Basil has warned of class action if the river is polluted. Picture courtesy of PNG Forest Products.

Bulolo MP Sam Basil will meet with officials from Morobe Mining Joint Venture today tomorrow to sort out several issues relating to the Hidden Valley gold mine in Wau, as it prepares to start pouring gold this year.
These include company accommodation being built in Lae, sedimentation of the Bulolo River, and the structure of royalty payments.
Mr Basil said from Canberra today that he would meet with officials from both Harmony Gold of South Africa and Newcrest Mining of Australia, who are joint venture partners in Hidden Valley and Wafi.
“An earlier meeting was held in Melbourne with the executives of Newcrest, however, many issues relating to the developments in Bulolo were not raised as the meeting was to meet the other half owners of the MMJV,” he said.
Among the issues to be discussed to today’s meeting will be the building of MMJV staff accommodation at 10-Mile outside Lae, and not at either Wau or Bulolo, as demanded by the local people.
“Bulolo has had earlier experiences of mining activities taking place there, and after the resources were reaped off, the mining companies disappeared, leaving behind a big holes with no sustainable activities or infrastructure both towns,” Mr Basil said.
“The 1980’s saw the worst of the two towns, which were both branded as ‘cowboy towns’.
“A public forum will be held back in Wau with appropriate community representatives involve, including the newly-formed Bulolo District Development Foundation, which consists of all professionals from Bulolo in PNG and overseas, business house representatives and the ordinary residents and people of Wau/Bulolo.”
Mr Basil also expressed his disappointment at landowner executives for not doing enough to pressure the company to focus its attentions in terms of infrastructural developments back into Wau and Bulolo.
“The company must understand that dealing with a particular landowner group only does not provide a one-stop shop to the company,” he said.
“They must understand that the entire people of Bulolo are closely watching and they will understand when there may not be enough jobs or business activities for everyone.
“But seeing the company building its infrastructure in Wau and Bulolo will bring relief into their hearts, because they are still haunted by the bad experience of the past, which makes the issue very sensitive.”
Mr Basil said unlike MMJV, the national government had made available K7 million for 21 houses for Wau police, while Morobe provincial government contributed K500,000 for police houses in Zenag, K1m for a grader and rubbish collections trucks, as well as K8.5m worth of developments.
“Those developments, if and when are constructed in Bulolo will add pressure to improvement of the town’s utility services such as water upgrade, communication upgrade, electrification upgrade and so on,” he said,
The other issue will be the sedimentation of the Bulolo River caused by the mining upstream, which has greatly affected the local alluvial miners, and there is a possibility of Mr Basil engaging an independent group to assess the environmental damage.
He said there was the possibility of extending the affected areas into Middle and Lower Watut.
“If negotiations are not addressed properly after the presentation of the reports, then a class action will be the next possible action,” Mr Basil warned.
“Community programmes and projects will also be discussed as the company is running its own programmes in duplication or against the district’s and the national government’s rural developmental focus.
“The structure of the royalty payments will also be discussed as the mining company will start pouring gold this year and the impact to the local communities can be affected if the current structure is not updated or thoroughly looked at.”
A report from the meeting will be made available for the media and the Bulolo people by Wednesday.
Posted by Malum Nalu at 3/01/2009 03:42:00 PM