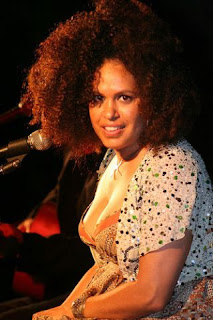 CHRISTINE Anu is finally here and performing tonight for the first time in Papua New Guinea  at what better place than the country’s party capital, Lamana’s Gold Club.

So who is she and where does she come from?

Anu was born in to Torres Strait Islander indigenous parents from Saibai and .

She began performing as a dancer and later went on to sing back-up vocals for The Rainmakers.

Her first recording was in 1993 with ‘Last Train’, dance remake of a Paul Kelly song.

The follow-up, ‘Monkey and the Turtle’, was based on a traditional story.

After ‘My Island Home’, she released her first album, Stylin' Up which went platinum, and also gained her a position as a spokeswoman for Aborigines and Torres Strait Islanders.

In 1995, Christine won an ARIA Award for best female recording artist as well as a Deadly Sounds National Aboriginal and Islander Music Award in 1996 for best female artist.

Baz Luhrmann asked her to sing on the song ‘Now Until the Break of Day’ on his Something For Everybody album.

It was released as a single and the video then won another ARIA award and led to her being cast in Moulin Rouge!

It took five years for a follow-up to Stylin' Up to be released; 2000's Come My Way made her a mainstream star.

Anu has been nominated for 16 ARIA Awards.

She has also had a notable acting and TV career, appearing in Dating the Enemy-a 1996 Australian film starring Guy Pearce and Claudia Karvan, and then an Australian stage version of The Little Shop of Horrors in the same year.

Anu was offered a role in a Broadway production of this musical but had to decline due to commitments in recording her second album.

In 2003, she appeared as Kali in The Matrix Reloaded and played the character on the video game Enter the Matrix.

In 2004, she became a judge on Popstars Live, a television quest broadcast on the Seven Network similar to Australian Idol.

The programme failed to achieve a similar level of success, leading to network executives to pressure the judges to offer harsher criticism of the contestants.

Anu refused, leading to her resignation as a judge that year.

In a statement issued on her departure, she said: "I chose to play a positive role model and wanted to encourage these young people in their endeavours, rather than criticise them.

“Although leaving Popstars Live was a difficult decision for me to make, I do feel somewhat relieved that I can now focus on my music."

So that’s her biography wrapped up in a nutshell, so make sure you don’t miss out on your opportunity to see her live at the Gold Club tonight.

Members free entry with proof of card, and non-members K40.

Be in early to get the best seat in the house. See you at the Gold Club!