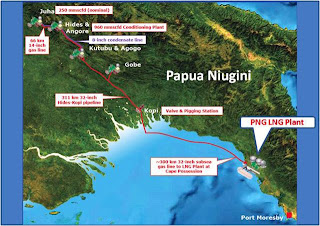 By DANIEL KORIMBAO
Editor-In-Chief, The National

The global financial crisis has wrought havoc around the world, with some of the world’s major banks like Lehman Brothers having collapsed, and others forced to merge or surviving with huge government bailout programmes.
Major economies are either in recession, or their growths have dramatically slowed.
Big companies around the world like Toyota of Japan have reported unprecedented losses, and have cut back production and sacked workers to stay afloat.
With a lot of uncertainty and some level of distrust hanging over the global scene, banks and financial institutions are refusing to lend money, and even viable companies are now in trouble or unsure about their future.
Against this very gloomy backdrop, some in government found it not unreasonable to describe it as a “coup” when it was announced that the government had secured the necessary funding from an international source to finance its equity in the PNG LNG project (map above).
The LNG project is a massive project which will cost about US11$ billion.
Project operator ExxonMobil and its partners plan to draw gas from reservoirs in the Southern Highlands province, and transport it by pipeline to the Konebada Petroleum Park outside Port Moresby where it will be processed and exported.
The government decided it would take up the full 19.4% equity in the project, and not sell it down.
It had to secure financing to take up this equity, and chose to seek the funds offshore, aware that failure could raise questions about the credibility of the entire project.
In November last year, State Enterprises Minister Arthur Somare, who had led the negotiations for funding, announced that a deal had been struck with International Petroleum Investment Company (IPIC).
An agreement was concluded by the Independent Public Business Corporation on behalf of the National Government with IPIC, which is wholly owned by the Abu Dhabi Government of the United Arab Emirates.
Essentially, the government under this agreement is exchanging its 17.56% stake in Oil Search, held by IPBC as trustee, for $A1.6 billion from IPIC under an exchangeable bonds arrangement.
The deal attracted its fair share of criticism from the Opposition and the Treasury Department.
But it also won applause from leaders of some financial institutions that attended the PNG Mining and Petroleum Conference in Sydney in December.
A legal action by Petromin Ltd threatened to derail the financial deal.
Petromin CEO Joshua Kalinoe believed his organisation was legally vested the power to advance the LNG project, and not IPBC.
The legal action was later withdrawn, removing an unwanted hurdle to the deal.
Last week, Minister Somare announced that IPIC had deposited 1.681 billion Australian dollars into a quarantined bank account in Singapore.
The account is ‘quarantined’ because the use of the funds will be exclusively for the purposes of funding the government’s equity and its contribution to the capital expenditure of the Project.
Funds will be made available when required as the PNG LNG Project proceeds from the current front end engineering and design (FEED) stage to project construction.
The LNG Project consortium led by ExxonMobil has set a timetable that will result in a final investment decision by the end of this year with project implementation to commence in early 2010.
Mr Somare reiterated the point to Members in Parliament last week that the PNG Government’s financing arrangement with IPIC provided an added element of certainty to the project, which promises to transform the national economy when gas is exported in 2014.
The finalisation of this financing deal also adds greater confidence around the Project, especially at this time when the Project is focused on tying up marketing, debt financing, and engineering, construction, and procurement contracts before Project Sanction in October and Final Investment Decision in December this year, the minister added.
Given the stage the PNG LNG Project is currently at in FEED, the Project’s eventual delivery commencing early next year will position Papua New Guinea as the newest gas supplier to the world.
According to Mr Somare, the PNG LNG project is prioritised as number five in the global pipeline of LNG projects earmarked for development.
In the Asia Pacific region, the PNG LNG Project is ranked number one.
Clearly, the Government is committed to ensuring that Papua New Guinea can commence LNG exports by late 2013 early 2014.
With financing for equity now securely in the bank, the government needs to move quickly to address the concerns of landowners, and to have in place the benefit sharing agreement.
Landowners in Southern Highlands, Gulf and Central provinces need to be satisfied about their involvement in this massive project.
The rest of PNG will also need to be assured of their benefit in this project.