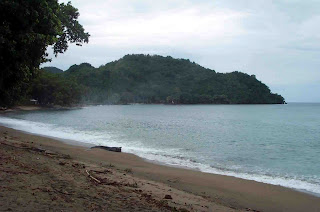 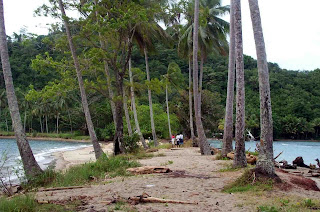 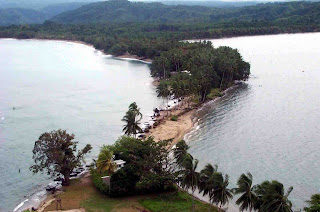 Salamaua as seen from the hill overlooking it 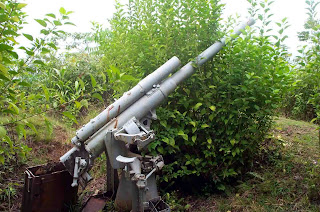 A Japanese WW11 gun at Salamaua


In the build-up to ANZAC Day, we continue to feature WW11 icons of Papua New Guinea, and this time shift to Salamaua, Morobe province, one of the most-famous places in Papua New Guinea because of its colonial, gold rush, and WW11 history...
Salamaua, Morobe Province, played a pivotal role in the history of Papua New Guinea.
World-famous Salamaua Point, scene of some of the bloodiest fighting of World War 11 in PNG, on September 11 in 2003 marked the 60th anniversary of its recapture from the Japanese.
This jewel in Morobe’s crown, an icon that time has forgotten, is now more or less a forgotten ghost town.
In 2002, Kokoda celebrated its 60th anniversary with commemorative ceremonies in both PNG and Australia, which rekindled interest in its history.
What many do not know is that the Japanese launched their attack on Port Moresby over the Kokoda Trail from Salamaua, and when the attack failed, turned the port into a major supply base.
It was eventually attacked by Australian troops flown into Wau.
Japanese reinforcements failed to arrive and the town was taken in September 1943 in what has become known as the Battle of Salamaua.
Salamaua – the “town of gold”- has never regained its shine.
The Australians recaptured Salamaua in September 1943 but by then, it was too late, as places like Lae and Port Moresby had taken its glory.
Veterans in both Australia and PNG have called for similar recognition to be accorded the battlefield of Salamaua as it marked the 60th anniversary of its recapture in September 2003.
It was the main port and airstrip for the goldfields of Wau and Bulolo during the gold rush days of the 1920s and 1930s.
It was headquarters for the all-powerful New Guinea Goldfields Ltd, had its own shops liked the famed Burns Philp, New South Wales and Commonwealth banks, named streets, hospital, bakery, theatre, bars where characters like the legendary Errol Flynn once strutted his stuff before becoming a Hollywood legend, and was a famed port of call for swashbuckling gold miners from all over the world.
It was here that expeditions into the undiscovered hinterland – including the famous exploration into the Highlands of New Guinea by the Leahy brothers and Jim Taylor – were launched.
Rivalry between Salamaua and Lae for the capital of New Guinea following the demise of Rabaul in the 1937 volcanic eruption was legendary.
But for all that Salamaua has contributed to the development of PNG and the world – through the millions in gold that was taken out - it is one of the greatest ironies that it is now a forgotten backwater, left to the mercy of the vast Huon Gulf which threatens to swamp its narrow isthmus any moment, despite repeated calls for a seawall to be built.
Development is limited despite efforts by the Morobe Provincial Government, there is little economic activity, and the price of outboard motor zoom has skyrocketed recently contributing to massive inflation.
The people, to this day, are resentful at the mining companies that made millions from their land and left them with nothing, and at both being made victims of a war that was not their doing.
Never mind that these days its beautiful bathing beach and coral reefs are havens for people from Lae – mainly the expatriate community - who have built weekend houses on the peninsula to get away from the traffic, phones, and bustle of the city.
The discovery of gold at Edie Creek above Wau in 1926 sparked off a gold rush of massive proportions, which led to the development of Salamaua as capital of the Morobe District.
The rigorous walk between Salamaua and Wau took up to a week, the flamboyant Errol Flynn writing of how the gold fields had to be approached from Salamaua by 10 days’ march through leech-infested jungle, in constant fear of ambush, and at night wondering “whether that crawly sound you heard a few feet away might be a snake, a cassowary or maybe only a wild board razorback…I have seen Central Africa, but it was never anything like the jungle of New Guinea”.
Lae was but a “company” town and was very much a satellite of Salamaua.
Salamaua sprang up before Lae and because it was the administrative and commercial centre of the District and also the port for the goldfields, it continued to dominate its sister across the Huon Gulf right up till WW11.
Shipping interests refused Lae as a port, probably because they had already established themselves at Salamaua before Lae developed.
The powerful New Guinea Goldfields Ltd – following a dispute with Guinea Airways – purchased its own plane and established its own aerodrome on Salamaua in 1929.
The government also resisted pressure to have Lae built up as the chief town of Morobe District, and at times, even affirmed its preference for Salamaua by stubbornly refusing to use either the aviation or shopping facilities at Lae.
Following the disastrous volcanic eruption in Rabaul in May 1937, a protracted and bitter debate over the merits of Salamaua and Lae ensued, when Australian minister for territories W.M. Hughes – who in his days as prime minister had been responsible for New Guinea coming under Australia’s mandate - chose Salamaua as both port and capital.
Hughes was accused of being bribed by Burns Philp and New Guinea Goldfields, the Australian government was accused of apathy and irresponsibility in its attitude towards New Guinea affairs, and the Pacific Islands Monthly and Rabaul Times led the anti-Hughes and anti-government debate.
It became a matter of great controversy that that Canberra press corps, which had been faithfully reporting new developments for six months, in December 1938 produced a satirical newspaper Hangover containing a parody of the controversy under the title “Lae off Salamaua: Capital crisis causes crater cabinet confusion”.

The article reads: “A new crisis has arisen overshadowing the budget, the coal strike, and Hitler. Alarming tensions were created when the Prime Minister received the following urgent message from Mr Hairbrain, M.H.R: ‘Lae off Salamaua, Joe! Natives hostile!’Mr Hairbrain’s message has created the profoundest sensations in Federal political circles. It is feared that the natives may try to make capital out of it. The situation is fraught with grave possibilities and impossibilities. Mr Lyons summoned cabinet immediately. ‘Wow!’ said the Prime Minister as he staggered from the cabinet room after the tenth day with the problem apparently nearer no solution. ‘That’s it!’ yelled a chorus of weary ministers. ‘Why the hell didn’t we think of Wau before?’ Mr Hughes collapsed. The crisis had passed.”
Rabaul, however, continued to remain as capital of New Guinea until 1941 when renewed volcanic forced the transfer to Lae in October 1941 right up to the Japanese invasion in January 1942.
War, however, had begun in the Pacific with the Japanese attack on Pearl Harbour on December 7, 1941.
Rabaul was bombed on January 4, 1942 followed by Lae, Salamaua, and Bulolo on January 21.
This was the beginning of the end of Salamaua’s ephemeral reign as the “town of gold”.
To go into detail about the long and bitter fighting that took place between Salamaua and Wau in 1942 and 1943 would fill pages.
Many hundreds of Japanese, Australians, as well as Papua New Guineans were killed in the two years of fighting.
To this day battlefields like Salamaua Point itself, Mubo along the famed Black Cat Trail between Salamaua and Wau, The Pimple, Green Hill, Observation Hill, Bobdubi Ridge, Komiatum Ridge, Nassau Bay, Tambu, Mount Tambu, Ambush Knoll, Orodubi, Salus Lake, Lababia, Davidson Ridge, and Roosevelt’s Ridge bear the scars of those bloody battles.
Briefly, the Japanese landed at Lae and Salamaua on March 8, 1942.
The New Guinea Volunteer Rifles and survivors of the 2/22nd Battalion from Rabaul destroyed all military supplies and withdraw into the hinterland where they observed the Japanese build-up.
In May, Kanga Force, which included the 2/5th Independent Company, was airlifted into Wau to operate as a guerrilla force against the Japanese in the Markham Valley.
On June 29, Kanga Force raided Salamaua inflicting heavy casualties and capturing the first Japanese equipment and documents taken by the Australian Army.
On August 31, a strong Japanese group arrived at Mubo but with the Japanese on the offensive along the Kokoda Trail and at Milne Bay, reinforcements were not available for Kanga Force until October when 2/7th Independent Company joined.
The 3rd Australian Division slowly fought its way towards Salamaua in a series of exacting and grim battles from April to August 1943 in a campaign largely overshadowed by the Papuan campaign the preceded it and by the capture of Lae that followed.
The Salamaua campaign was designed to screen the preparations for the Lae offensive and to act as a magnet to draw reinforcements from Lae to Salamaua.
The capture of Lae, the centre of the Japanese defensive line in New Guinea, was the allied target after the defeat of the Japanese in Papua.
General Sir Thomas Blamey, the Australian Commander-in-Chief, directed that Salamaua be starved out after Lae was captured.
On August 26, 1943, Major General Savige and his 3rd Division headquarters were relieved by General Milford and his 5th Division headquarters.
The 5th Division conducted the final operations around Salamaua, which was occupied by the 42nd Battalion on September 11, a week after the Lae offensive opened and five days before the 7th and 9th Australian Divisions entered Lae.
The legendary Australian cinematographer, Damien Parer, captured some of these dramatic moments for posterity in his famous works “Assault On Salamaua” and “Frontline At Salamaua”. Following Kokoda’s 60th anniversary, many Australian veterans of Salamaua also want their battlefield to be accorded the same recognition, as it too had its 60th anniversary in September 2003.
The same call has been echoed by old men in the Salamaua villagers – many of whom have died without being justly compensated – who served as carriers for both Australians and Japanese during WW11.
Maybe then, at least for a day, Salamaua will rise again.
Posted by Malum Nalu at 4/21/2009 12:00:00 AM