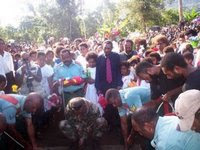 PNG Defence Force soldiers lower Dr Kigasung's casket into the tomb. This and all pictures by DAVID HARRO
Some of the thousands of people who attended Dr Kigasung's burial at Aluki village, Bukawa 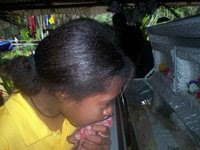 Tears for Dr Kigasung at Aluki 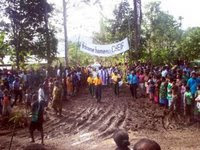 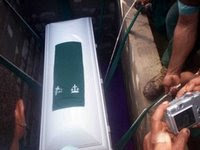 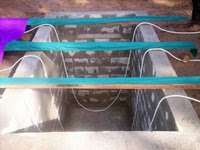 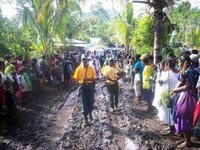 Flashback...we look back to the burial of Rev Dr Wesley Kigasung on Sunday, May 25, 2008 at his Aluki village, Morobe province...
Evangelical Lutheran Church of PNG leader, the late Bishop Doctor Wesley Kigasung, was laid to rest at his Aluki village in Bukawa, Morobe province, after 3pm last Sunday, May 25, 2008.
Thousands of people from the Bukawa villages, Lae, Morobe province, Papua New Guinea and overseas flocked to Aluki to see Bishop Kigasung buried in a concrete tomb.
Heavy overnight rain last Saturday night and Sunday gave way to bright sunshine in time for the burial.
It ended a week of mourning in which Dr Kigasung’s body traveled to Port Moresby, Mount Hagen, Madang and Lae before the final journey home to Aluki by road from Lae last Saturday afternoon.
Thousands of people lined the road from Lae to Aluki to bid farewell to Dr Kigasung as his motorcade drove past.
In emotional scenes, men, women and children wept, sang, waved banners, flags and threw flowers at the motorcade.
In one of the most-moving scenes, at Situm primary school, children sang a touching tribute to Dr Kigasung which brought tears to the eyes of those in the motorcade.
Many commented that the respect accorded to Dr Kigasung between Lae and Aluki yesterday, as well as that shown between Nadzab and Lae last Friday, and at the Sir Ignatius Kilage Stadium last Saturday, had never been seen before in this country.
At Aluki, tears again flowed freely for its favorite son as local villagers, those from Lae, and others from Siassi Island – the place where Dr Kigasung was born and the last place he visited – sang traditional songs of mourning for the charismatic and much-loved leader of 1.2 million Lutherans in PNG.
Last Sunday's funeral service was delayed because of the non-arrival of Morobe Governor Luther Wenge as expected.
The burial was later delayed again because of the slow drying of cement in the concrete tomb because of the wet conditions.
VIPs present included Lae MP Bart Philemon, Tewai/Siassi MP Vincent Michaels, Bulolo MP Sam Basil, former judge Don Sawong and Kambang Holdings chairman Namon Mawason as well as a representative of the American Lutheran Church.
ELCPNG Jabem District president Reverend Gedisa Okamaisa said Dr Kigasung was a “humble” servant of God and the people.
“He left us at a time when we least expected,” Rev. Okamaisa said.
“His death is a call for us to take ownership of the church.”
Posted by Malum Nalu at 5/14/2009 02:32:00 PM