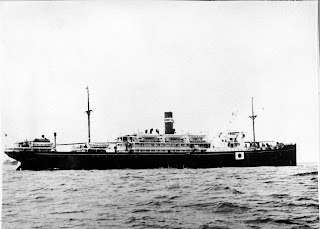 By Ilya Gridneff of AAP

The hardest thing for families who lost relatives in the sinking of the Montevideo Maru (pictured)  during World War II was not knowing the fate of their loved ones.

But for those families, closure may finally come on Wednesday when a plaque is unveiled at an official ceremony marking 's worst maritime tragedy.

Ailsa Nisbet, 82, along with her daughter Marg Curtis and cousin Ron Hayes, will represent one of 15 Australian families at the July 1 memorial at Subic Bay, on the west coast.

They leave on Monday to pay respects to Nisbet's brother Private John `Jack' Groat, who was on board the Montevideo Maru when it sank on July 1, 1942, carrying 845 prisoners of war from 's Lark Force and 208 civilian men.

The troops had been taken prisoner after invaded Rabaul in 's province in January 1942.

The unmarked Japanese ship left occupied Rabaul on June 22, 1942 but nine days later an American submarine, unaware it was carrying allied prisoners, torpedoed it off the coast.

The sinking of the ship was not reported back to , and for several years the fate of the prisoners of war was unknown.

Nisbet said for years it was a mystery as to what happened to her brother.

"The family was first told he was missing," she told AAP.

"Then they said `missing presumed dead', then we got a message he was a prisoner of war, then we got a letter from Jack saying he was being looked after by the Japanese.

"And there is still doubt about it," she said.

In 1997, Nisbet visited Rabaul to see where her brother was stationed and earlier this year for Anzac Day, Curtis and Hayes completed a three-day trek retracing the escape many Larkforce men had to make during Japanese occupation.

"It's been many, many years and nothing has been heard of the Montevideo Maru and it's just all coming out now.

"I'm the last member of the family and it will be a closure for me to go up there."

Former federal Labor leader Kim Beazley, whose uncle Reverend Sydney Beazley was lost on the ship, is the patron of the Montevideo Maru Memorial Committee.

Phil Ainsworth, in the for the event, said the committee aims to get more national recognition for the tragedy.

"This memorial will give the families some comfort because even now 67 years later they still feel discomforted and in grief," he said.

Another attendee is Andrea Williams whose grandfather and great uncle were on board. She wants a government response similar to that for the recently-found HMAS Sydney, another World War II sea tragedy that claimed 645 lives.

"There is a fair amount of literature on the sinking but there are some nagging specifics, like why there was no inquiry into the fate of these men," she said.

"It is still a secret as to why these men were left to their fate."

Australian archives had several passenger lists but they were inconsistent and there was no passenger manifest, she said.

"What has happened to the nominal roll of the men apparently on board?"

Veteran Affairs Minister Alan Griffin marked the 67th anniversary of the sinking of the Montevideo Maru by giving a speech to parliament last Friday.

"I've spoken to individuals who lost family members as part of the Montevideo Maru and I know these things remain with people forever," he said.

"I express my heartfelt sympathy for their loss.

"I told parliament it was shrouded in mystery and that must have added to their loss."