Macdhui is an icon of Papua New Guinea history 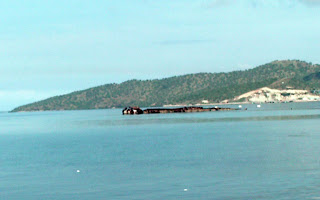 The wreckage of the mv Macdhui as seen from Kanudi 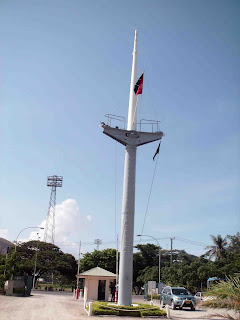 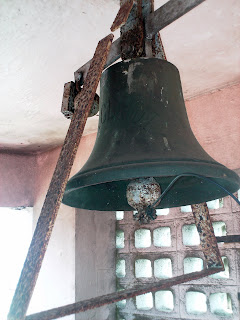 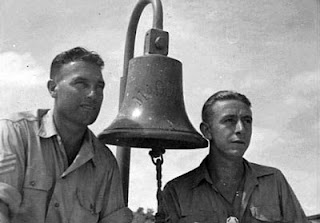 The bell of the mv Macdhui 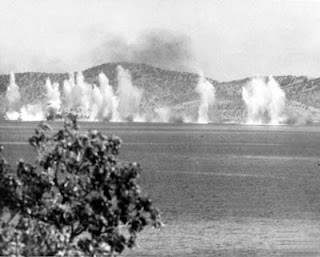 The mv Macdhui being bombed by Japanese planes 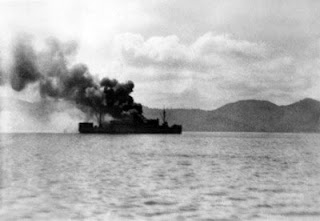 The mv Machdhui on fire 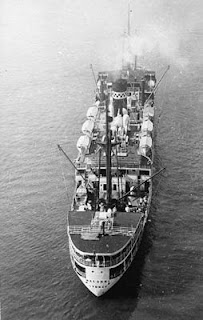 The mv Machdhui...unknown date
A small but significant anniversary takes place on Thursday, June 18, 2009.
This will be the 67th anniversary of the sinking of the mv Macdhui, sunk in the Port Moresby harbour by Japanese bombs on that day in 1942.
One of the best-known landmarks in Port Moresby is the wreck of the Macdhui in the waters just off the Port Moresby Technical College at Kanudi.
Many people just drive or walk past without knowing the significant role that the maritime legend Macdhui played in the development of then Papua and New Guinea.
In 2007, I was asked to be a tour guide for a retired US veteran of the Korean and Vietnam wars, and one of the World War 11 relics I showed him was the wreck of the Macdhui.
As we stood at Kanudi looking out to sea, I wondered what stories the deep blue sea, the rolling hills, and the wide sky could tell me about what they saw that fateful day in 1942.
The Macdhui, 4630 tonnes, built in Glasgow, Scotland, in 1930, was owned and operated on the Australia-Papua New Guinea service by Burns Philp and Company Limited.
Macdhui’s maiden voyage took place in March 1931, sailing to Suva, Fiji, via the Azores, Jamaica, and the Panama Canal, with a load of coal.
Then the Sydney to Rabaul route for Burns Philip with 167 first-class passengers’ accomodation.
On June 20, 1931, a fire broke out on another voyage between Madang and Lae, but the passengers were safely taken ashore in lifeboats.
MacDhui was safely towed to Salamaua, New Guinea's then administrative capital, by Neptuna, another Burns Philp & Co vessel.
After patching at Salamaua, MacDhui was sailed to Sydney for six weeks of repairs.
With the onset of war the ship was commandeered by the Navy and used to evacuate civilians from New Guinea, then carrying Australian troops back to Port Moresby.
On June 17, 1942, the Macdhui was attacked by Japanese bombers as it was discharging to lighters in Port Moresby harbour.
It began zigzagging around the harbour but took one direct hit which caused considerable damage.
The vessel later went alongside the main wharf to unload dead and wounded.
The next day, at 10.45am, there was another air-raid warning and the Macdhui moved out into the harbour and began manoeuvring.
Soon after the raid began, it took a direct hit.
The captain headed towards shallow water where his ship finally keeled over onto a reef.
Ten of the crew of 77 were killed along with five Australian gunners from 39th Battalion.
Altogether, the Macdhui took four direct hits.
The dramatic sinking was captured on a black and white movie film shot by the famous Australian cameraman, Damien Parer from a nearby hilltop.
The loss of the Macdhui was a great blow to the morale of the Australian troops in Port Moresby.
Until then it had been the only regular and reliable link between Australia and Port Moresby.
After the war, the Australian government compensated Burns Philp for its loss.
The wreck itself is now deeply pitted and corroded under the waterline.
It is gradually breaking up but even if it does slip completely under the surface part of the Macdhui will remain in Port Moresby.
In the late 1960s the mast was removed and now stands outside the Royal Papua Yacht Club as a memorial to those who died.
One of the bells was erected in the tower of St John’s Anglican Church in Port Moresby and to this day still calls parishioners to worship.
Former vice-commodore of the Royal Papua Yacht Club, Trevor Kerr, tells of a supernatural experience in 1979 when the ashes of the late Captain J. Campbell, skipper of the Macdhui, were laid to rest with his ship.
The powered launch Tina, owned and skippered by yacht club committee member Russ Behan, approached the wreck with Captain Campbell’s two sons, a United Church minister, and Kerr on board.
“The weather in the harbour was unusually placid, not a zephyr stirred,” writes former Port Moresby diver Neil Whiting in Wreck and Reefs of Port Moresby.
“The sea was so clear that the superstructure of the Macdhui could be seen below the surface of the water.
“There was not a ripple on the surface or current drift to break the calm.
“With heads bowed in prayer, the United Church minister upturned the urn containing Captain Campbell’s ashes and scattered the contents into the sea.
“Trevor, observing the ceremony in a more-detached fashion than the others, observed the most-amazing sequence of events.
“The ashes initially clouded the water as one would expect, but almost immediately condensed into a form similar to a teardrop.
“Then, the most amazing phenomenon occurred.
“The teardrop cloud quite rapidly crossed the six-metre intervening gap between the Tina and the Macdhui and disappeared into the hull.
“At a nudge from Trevor, Russ glanced up and also observed the incredible event.
“The engines of the launch were quickly started and in a state of chilled awe, the funeral party motored away.
“Captain Campbell had returned to his ship.”
Posted by Malum Nalu at 6/05/2009 07:06:00 PM