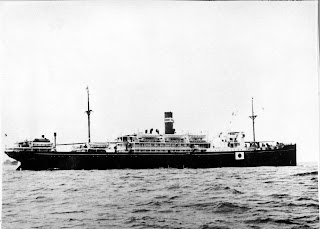 ’s worst maritime tragedy, which intimately involves , was remembered in a stirring commemorative service and unveiling of a plaque at in the Phillipines on Wednesday.

This was the 67th anniversary of the sinking of the Montevideo Maru (pictured) off the coast on July 1, 1942.

“There were fathers and sons, civilians and troops, missionaries and traders, businessmen and administrators,” ’s Ambassador to the Phillipines Rod Smith, who presided at the Montevideo Maru memorial service at , said.

“They had all been captured and interned by the Japanese in Rabaul.

“The youngest, the 15-year old, was Ivan Gascoigne, recorded as a clerk, the son of Cyril Gascoigne, who also died.

The unmarked Japanese ship left occupied Rabaul on June 22, 1942, but nine days later on July 1, American submarine USS Sturgeon torpedoed it off Luzon in the .

The saddest thing is that the wreck has never been found to this day, and both and PNG do not know the names of those killed, as the official nominal (katakana) roll – which might give a clue to the identities of those on board – has not been located

“It remains one of our country’s worst disasters.

“This memorial to the Hell Ships of World War 2 now includes a commemorative plaque to mark the tragedy of the sinking of the Montevideo Maru 67 years ago today.

“This tragedy is not forgotten.

“The families are not forgotten.

“These men are not forgotten.”