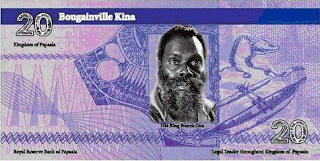 This guy is unbelievable! The recent notes in circulation……..

conman promises investors he’ll pay them in his own currency

One of the most wanted men in , Noah Musingku, has promised duped investors he’ll pay them in his own currency with pictures of himself and Jesus Christ on it.

Mr Musingku, who lives in a self imposed exile in with his own militia, has been sought by PNG police for years for defrauding hundreds of millions of kina from investors through his U-Vistract money scheme.

The first secretary of the office of ’s president, Dennis Kuiai, says people shouldn’t be duped again, as the currency is illegal.

“We strongly feel that this is something that will further divide Bougainvilleans, continue to promote disunity and it’ll continue to rip Bougainvilleans off their money and at the end without realising that they’re on their losing side, they’ll lose their fortune.”

But Dennis Kuiai says they’ve asked the PNG government pardon the conman, as it would help foster peace.