Eight-Mile Settlement sets the pace with photo exhibition and website 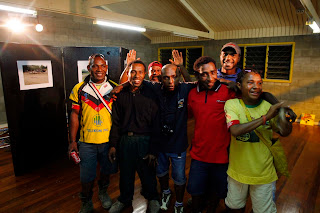 Emmanuel Onom Mel (centre with camera) with his friends from Eight-Mile Settlement at the opening of his exhibition ‘Life in 8 Mile is Hard’ at The University of Papua New Guinea.-Picture by SEAN DAVEY 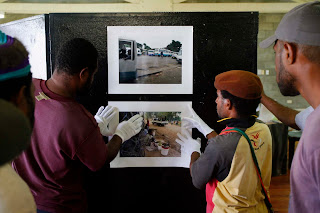 Local youths from Eight-Mile Settlment hang photographs in preparation for the opening night of the photography exhibition ‘Life in 8 Mile is Hard’ by Emmanuel Onom Mel and Wanpis Kaupa. – Picture by SEAN DAVEY 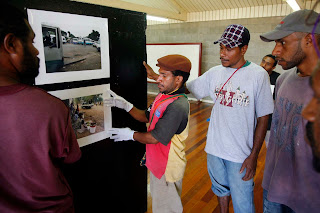 Local youths from Eight-Mile Settlement hang photographs in preparation for the opening night of the photography exhibition ‘Life in8 Mile is Hard’ by Emmanuel Onom Mel and Wanpis Kaupa. – Picture by SEAN DAVEY 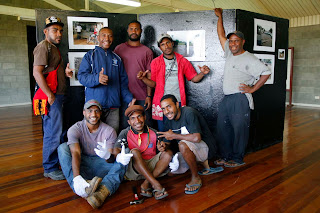 Locals from Eight-Mile pose for a group portrait at the University of PNG after hanging the photography exhibition ‘Life in 8 Mile is Hard’ by local Eight-Mile Settlement youths Emmanuel Onom Mel and Wanpis Kaupa.- Picture by SEAN DAVEY 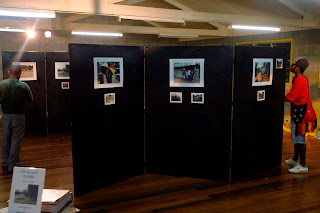 The exhibition at the University of PNG.-Picture by SEAN DAVEY
The Eight-Mile Settlement outside Port Moresby is setting the pace for other settlements in Papua New Guinea by having its own photographic exhibition and establishing its own website which features heartwarming poems and stories written by its residents.
The exhibition with a difference, titled ‘Life in 8-Mile is Hard’ opened at the University of PNG last Saturday night (Aug 22) and will next year be featured at the Monash Gallery of Art in Melbourne, Australia.
A difference in that it featured photographs by settlement youth who were taught and inspired by Australian professional photographer Sean Davey.
In what is believed to be a first for a settlement community in Papua New Guinea, Davey has also set up a website entirely devoted to the Eight-Mile Settlement, http://www.8milesettlement.com/ which showcases their photographs, writings and lifestyle.
The photography exhibition that opened at UPNG was part of a gala evening that showcased the fruits of an arts education programme that was run at Eight-Mile Settlement from June 1-7 this year.
Funded by The Law and Justice Sector through AusAID, and facilitated by UPNG, the workshop attracted over 100 local youths from Eight-Mile Settlement each day the workshop was on.
The group was headed by UPNG theatre lecturer and Eight-Mile resident David Motsy.
The workshop focused on four main activities: painting, drama, music and story telling.
“Fruits of the workshop can be viewed at http://www.8milesettlement.com/ and also I believe that this website is the first in Papua New Guinea devoted entirely to a settlement community,” Mr Davey said.
“While I was facilitating at the workshop, I was photographing in the settlement and interviewing residents.
“Local boys would accompany me and help with introductions and translation.
“I gave them a small digital camera that I had in my camera bag and asked them to start using the camera to photograph as well.
“They really liked photographing and they passed the camera amongst themselves and made plenty of pictures of the settlement, including portraits, landscapes and close-ups.
“One youth, 17-year-old Emmanuel Onom Mel, in particular liked the camera and taking pictures a lot.
“He kept the camera and would photograph everything.
“He was very enthusiastic.
“I downloaded the photographs that the youths made and I was very impressed by the intuitive style in which they were working, photographing very candidly and freely.
“They were getting ‘real’ pictures of settlement life, compared to the more formal and posed photos that I, as an outsider, was making.”
Mr Davey showed a selection of Emmanuel's work, and other youths’, to the curator at the Monash Gallery of Art in Victoria, and he was very impressed by what he saw.
“On the basis of this, he offered to have an exhibition of my work, along with work done by Emmanuel, at the Monash Gallery of Art in February and March 2010,” he said.
Posted by Malum Nalu at 8/23/2009 04:59:00 PM