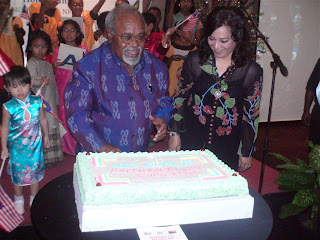 Malaysian has and will continue to invest highly in Papua New Guinea, says Malaysian High Commissioner to PNG Datin Blanche Olbery.
Ms Olbery said this at a function at the Holiday Inn in Port Moresby tonight to celebrate Malaysia’s 52nd anniversary of independence.
“Malaysia’s investment in PNG is relatively high, as you can see by the number of prominent Malaysian businessmen present here today,” she told guests including Prime Minister Sir Michael Somare.
“The prospect of Malaysian investment in PNG remains positive as currently we have strong relations with PNG and our relations can be further enhanced for further investment to be facilitated into the resource sectors of the country.
“To date, the Malaysian private sector continues to have significant presence with investments totaling K3 billion since 1994.
“In addition, Malaysian companies are the leading citizen job providers in PNG owing to large number of jobs created per million kina invested and have in fact generated 36, 000 jobs since 1995.”
Ms Olbery predicted this investment would grow with the liquefied natural gas (LNG) project soon to come on stream.
“With the recent discovery of world’s biggest natural gas reservoir and the LNG project, which is expected to begin its operations soon as well as with political stability in the government, the economic interest in PNG will continue to grow and I believe in near future, there would be an influx of foreign investors and businessmen to invest in this country, including new investors from Malaysia,” she said.