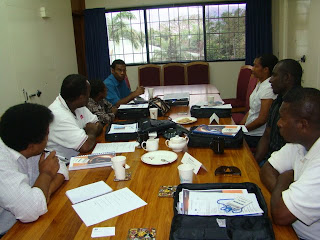 2008/09 UK Chevening scholarship recipient Mellie Samson (in blue shirt) who returned from the UK on Friday after completing his masters in conservation science briefs the departing scholars. Next to him is Deborah Kakis, Reichert Tanda and facing him is Rosemary Benjamin, Junior Novera and Erick Kowa during an induction programme at the British High Commission in Port Moresby. BHC scholarship officer Kila Kome is sitting next to Mr Tanda. 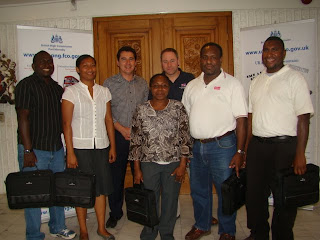 Five Papua New Guineans have secured UK Government educational scholarships to study in the United Kingdom.
In a first for PNG, one of the scholars, Junior Novera, is the inaugural recipient of the Steamships Chevening Scholarship a partnership between the Steamships Trading Company Limited and the UK Government.
Junior will be studying for a masters degree in conservation biology and wildlife management at Lancaster University.
The other recipients, awarded scholarships under the Chevening and Commonwealth Scholarship Programmes include Erick Kowa, who will study energy futures at the University of Aberdeen and Rosemary Benjamin who will study biotechnology at the University of East London.
Reichert Tanda will study economic development at the University of Bradford and Deborah Kakis will study the modern application of mathematics at the University of Bath.
Steamships managing director David Cox said the company’s sponsorship of the Steamships Chevening Scholarship scheme was integral to the company's commitment to the future and development of PNG and its desire to build local expertise and world class scientific capacity.
“We at Steamships and the broader Swire Group take pride in being environmentally aware and responsible.
"Strengthening research capacity in PNG is one of the most effective and sustainable ways of advancing conservation and environmental responsibility.
"Congratulations to Mr Novera on securing the scholarship and we wish you well in your studies,” he said.
British High Commissioner to PNG, David Dunn, thanked Steamships for co-funding the Chevening Steamships scholarship and congratulated Mr Novera and the four other scholars on securing scholarships to undergo a masters programme in the UK.
“The UK spends more than half a million Kina a year on educational scholarships in PNG. By securing a Chevening or Commonwealth scholarship you are now clearly identified as a future leader in your area expertise.
"I hope that you will get the most out of your experience in the UK, and proudly fly the flag for PNG during your 12 months abroad.
"Safe travels and we look forward to welcoming you back to PNG next year when you can put to work the skills and experience you have developed during you’re time in Britain" he added.
The scholars underwent an induction programme at the British High Commission last Friday where they were briefed on studying in the UK by BHC staff and previous Chevening/Commonwealth scholars.
They were then joined by members of the British Graduates Society to wish them well on their travels.
Applications for UK scholarships for academic year 2010-2011 will open in the next two weeks. Visit http://www.ukinpng.fco.gov.uk/ or watch the local press for information.
Posted by Malum Nalu at 9/20/2009 06:32:00 PM