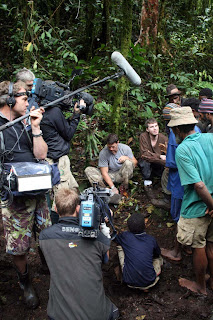 Picture caption: The BBC television crew film the discovery of a new species within the crater of Mt Bosavi. Scientists from the , US and PNG chat with villagers from the Fogomaiyu, Talisu and communities within the Mt Bosavi area who were part of the scientific expedition. Picture by BBC/Jonny Keeling.

The premier of a BBC television series that featured the discovery of 40 unknown species in the Southern Highlands Province attracted over 4 million viewers in the .

BBC-produced “ of the Volcano” follows a group of scientists to Mt Bosavi, a dormant volcano in , where they discover 40 previously unidentified species.

The series, which premiered in the on Tuesday, was the country’s most watched TV programme and attracted more than 4 million viewers or 18% of the total TV audience in the between 9pm and 10pm on that evening.

The star BBC series, which was filmed in Southern Highlands early this year, unearthed 16 new frog species, three fish, a bat and a giant rat, all of which had never previously been documented.

British High Commissioner to PNG, David Dunn, said the BBC programme’s lion share of the ratings showed the huge interest that PNG’s biodiversity continues to attract globally including the .

“ is one of the world’s biodiversity hotspots.

“Its wildlife represents about 5 to 7% of the world’s biodiversity as it is home to hundreds of species of mammals, birds as well as plants.

“Visiting scientists continue to make remarkable discoveries in different parts of the country, especially in isolated areas such as Mt Bosavi, a dormant volcano which last erupted 200,000 years ago,” he said.

With 33 million hectares of PNG still under tropical forest and mangrove cover, Mr Dunn said there was potential for more discoveries.

“PNG still retains most of its forest cover and there is scope for further discoveries – which will not only interest nature lovers but researchers as well who continue to search for plants which someday could provide the cure for some of the world’s diseases,” he added.

The Guardian newspaper, in an editorial following the BBC series’ premier, said it would be a positive outcome for the British public broadcaster and the world if their programme increased awareness of PNG’s flora and fauna.

“Seen by 4 million people on Tuesday, the film showed waterfalls pouring from caves into a perfect forest, and a giant tame rat, apparently new to science, nibbling a leaf, unafraid of humans. If the programme raises awareness of 's natural treasures, then it will have achieved something good,” stated the newspaper.