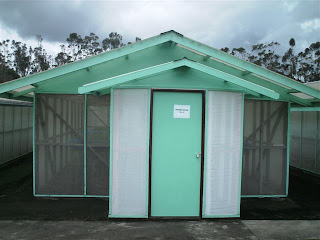 Front of one of the new potato screen houses 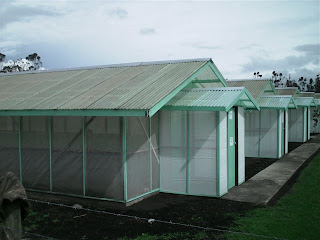 Side view of the new potato screen houses 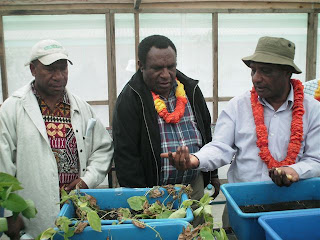 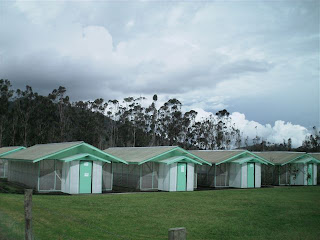 The new potato screen houses in the Tambul valley 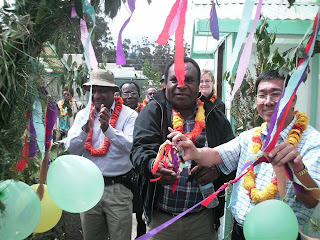 Tambul-Nebilyer MP Benjamin Poponawa (centre) cuts the ribbon to open the new potato screen houses, assisted by FPDA chairman Fabian Chow
The Fresh Produce Development Agency officially opened its 24 newly-constructed aphid (pest)-proof screen houses for potato mini-tuber production at Tambul in the Western Highlands province last Tuesday.
The total investment by the Papua New Guinea government and the governments of New Zealand and Australia for the development of these 24 screen houses is about K1.2 million.
The government of PNG through the Department of National Planning and Monitoring is the significant funder of the project through its annual development budget.
These 24 screen houses will significantly contribute to the income and livelihoods of many of the resource-poor citizens of PNG, living in the higher altitude areas of PNG.
The seed potato programme is a major programme under FPDA’s production & supply division in terms of development of a single vegetable crop.
FPDA focused on the crop because it is an important source of cash income for the people living in the higher altitude areas of PNG such as Tambul in Western Highlands; Kandep and Laiagam districts in Enga; Upper Mendi, Ialibu and Nembi plateu in Southern Highlands; and Daulo and Okapa in Eastern Highlands, to name a few.
The programme has three components:
1. Plantlets production using tissue culture technique;
2. Mini-tuber production using plantlets; and
3. Field production of elite, mother and certified seed through private seed potato growers
FPDA had an initial agreement with National Agriculture Research Institute in 2004 for NARI to supply 2, 000 plantlets per month.
In 2007, FPDA signed a new agreement with NARI for 6,000 plantlets per month due to the renovation of three old screen houses and construction of nine new screen houses.
Recently, in June 2009, FPDA yet again signed a new agreement with NARI for 12,000 plantlets per month following the construction of 12 new screen houses, which now brings the total number of screen houses to 24.
The total annual requirement of plantlets will now amount to 144,000 plantlets per year.
The 24 houses are expected to yield more than 8,000kg of mini tubers per year.
“This is a significant improvement compared to five years ago whereby FPDA was only able to produce 500 to 1, 000kg of mini tubers per year,” explains FPDA production and supply manager Robert Lutulule.
“The 8,000kg of mini tubers will be further multiplied on station twice before selling to mother and certified private seed growers.
“With an average multiplication rate of 5kg per kg of seed potato, it is expected that 40,000kg of generation one seeds will be produced in one year’s time; 200,000kg of generation two seeds in two year’s time; one million kg of generation three seeds in three year’s time and finally five million kg of generation four seeds in four year’s time.
“The generation four or certified seeds are normally used by ordinary farmers to produce potatoes which are sold in open markets, fast food outlets and hotels.
“The value of this five million kg of seed potatoes is estimated at K10 million, meaning that seed growers have the potential to earn K10m per year from the sale of their seeds.
“These five million kg of seeds is expected to generate more than K25m for ware potato growers per annum.
“With the estimated lifespan of the aphid proof screen houses of 10 years, these 24 screen houses are expected to enrich seed potato growers with K100m and ware potato farmers with K250m over 10 years.”
Currently, the programme has 52 seed growers.
Thirty are located in Western Highlands and Southern Highlands, while 20 are located in Eastern Highlands.
“FPDA has been approached by interested parties in Enga, Southern Highlands and Simbu provinces to help expand the seed potato programme to these respective provinces,” Mr Lutulule adds.
“The seed potato programme provides training, technical support and advisory services free of charge, especially to existing and intending private seed potato farmers.
“It has eight officers who have various degrees of experiences in potato production and seed certification.
“FPDA is currently running an innovative seed potato production scheme with the support of the Eastern Highlands provincial government, whereby, through core funding support from the provincial government, it is identifying and developing ordinary farmers to become competent seed potato farmers in the province.
“The province is now increasingly becoming self-sufficient in seed potato supply because of the project.
“Five years ago, farmers in Eastern Highlands used to source all their seed requirements from Western Highlands’ seed growers.
“The success of this model has convinced FPDA to expand the scheme to other provinces in the Highlands region and the coastal provinces that have climatic conditions suitable for growing potato.”
Posted by Malum Nalu at 9/28/2009 10:06:00 PM