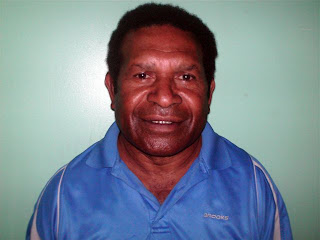 By KEITH PUARIA of The National, Papua New Guinea's No. 1 daily newspaper

The beMobile Cup grand final on Sunday between the Toyota Enga Mioks and the NGIP Agmark Gurias will bring the curtain down on Season 2009, however, work does not stop behind the scenes.
Long-serving rugby league man, Joe Kuman Tokam (pictured), has been very much a part of the game since hanging up his boots in 1983.
Mr Tokam is operations manager of Papua New Guinea’s premier rugby league competition, the bemobile Cup.
With the Enga Mioks remaining in Port Moresby after their preliminary win against the Goroka Lahanis last Sunday, and the Gurias set to arrive before the end of the week, technical preparations outside of the playing field have been at full throttle for the competition management team and Tokam in particular.
“Apart from the tussle expected between the two sides on centre stage, we are going flat out before the day, making sure everything is in place, everything technical accounted for, and every little area in sight”, he said.
The competition, since its commencement on June 21 has gone according to schedule, according to Tokam, with no real major concern for organisers, and this weekend will be no different.
“The game has come a long way from the previous years,” he said.
“Apart from the incidents that have been much publicised during the season, and steered away from the main show, it has been a much better year than the past.”
Gates at the Lloyd Robson Oval are set to open at 8am with a bumper programme featuring junior games, women’s games and a whole lot more.