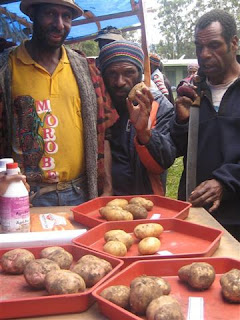 By SENIORL ANZU of NARI

A major vegetable development project will be launched on Friday at Alkena in the Tambul district of Western Highlands.

Vegetable growers in the district will celebrate and witness the official ground breaking ceremony of MKL Vegetable Farming Group and launching of a project titled “Developing a Sustainable Potato and Vegetable Production in the – Western Highlands Province”.

The MKL Vegetable Farming Group is a newly-established community initiative involving farmers led by Maktol Oke, a specialist potato seed grower from Aiyaka tribe in the area of Tambul.

Mr Oke, who is also the chairman of the MKL group, said the initiative was an “impact project” for the 68, 000 people of Tambul Nebilyer district which aimed to enable farmers to  increase their potato and vegetable production for cash and food to improve their livelihoods.

He said Mr Poponawa - who supported the launch preparations with K6000 - and Western Highlands Governor Tom Olga would officiate at the historic occasion.

The initiative was developed with the involvement of the National Agricultural Research Institute (NARI) and Fresh Produce Development Agency (FPDA).

“The Alkena Lutheran Church has provided vacant land, which has been developed into a central resource centre for seed multiplication and distribution to farmers throughout the district, province and other potato growing areas in the country,” Mr Oke said,

“The centre will also be used for farmer training, demonstration and information sharing by service providers such as NARI, FPDA and provincial division of primary industry.”

Mr Oke said the development was a collaborative effort involving the community, government agencies (NARI and FPDA) and the church and stood to benefit the entire Tambul community.

He added potato was an important food and cash crop for high-altitude areas like Tambul but the industry was thrown into chaos due to the emergence of the late blight disease.

The project is anticipated to produce clean and certified seeds to be distributed to farmers.

It is the major producer of potato and temperate vegetables such as broccoli, cauliflower, cabbage and carrots in the country and the major supplier of the renowned Mt Hagen market in terms of fresh produce.