Papua New Guinea are the champions 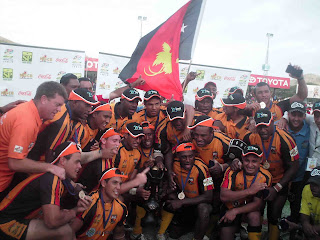 today gave a rugby league lesson to Cook Islands and qualified for next year’s Four Nation’s Cup with a 42-14 trouncing in the SP Brewery Pacific Cup grand final at the Lloyd Robson Oval in .

Watched by a fullhouse patriotic crowd, which included Prime Minister Sir Michael Somare as well as Governor General Sir Paulias Matane, the Kumuls showed all and sundry that their bid for the Australian NRL competition was no joke with an eight tries to three romp.

A dazzling 60th minute try by the scintillating 20-year-old showed his sheer class as he had the in sixes and sevens all over the paddock.

“Everything went well today,” he said before before swamped by hundreds of adoring fans, in scenes that resembled Beatlemania

“We’ve been training very hard for the last three to four weeks.”

The Kumuls, fired up after their 44-14 thrashing of last Sunday, had too much all-round strength and was supported by an expected sellout patriotic crowd.

They were led capably by their UK-based contingent of Menzie Yere, Jason Chan and John Wilshere.

came in with all guns firing and, from the outset, looked set to cause another David v Goliath epic as they had so convincingly done over the last two weeks against Samoa in and then in their Pacific Cup game last weekend.

The Kumuls drew first blood in the 11th minute with a try to winger Richard Kambo, off a brilliant offload from Mead, and with the extras from Wilshere, were flying high 6-0.

A 15th minute touchdown from Mead brought PNG ahead to 10-0, however, Cook Islands’ fighting spirit was epitomised after that with quick tries to halfback Daniel Fepuleai in the 24th minute and another three minutes later to centre Keith Ualia to tie the scores at 10-10 and set the stage for a thrilling showdown.

Centre Anthon Kui, however, had other ideas as he scored in the 32nd minute to put the Kumuls ahead, and with another from Mead, the home side led 20-10 at the break.

allowed agro to creep into their game, and this cost them dearly in the last 10 minutes, although they had some consolation with a high-flying try to winger Domique Peyroux.

“We wish you all the best in the Four Nation’s.

“We have no NRL experience.

“Hopefully, this will give us something to build on.”

But while it was tears in the Cook camp, all celebrations for PNG, as hundreds of fans – in unforgettable scenes - swamped on to the field and carried their heroes, posed for photographs, as well as asked for autographs.

“Thank you for all your support this afternoon,” said captain Wilshere, who, apart from the hundreds, had his own legion of fans from his Butibam village in Lae.

“ league’s our sport and we love it.

“The Four Nation’s will be a tremendous boost for our country.”

Coach Adrian gave a vote-of-thanks to the PNG crowd for their unwavering support over the years.

“Young players are coming in all the time.