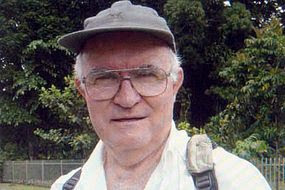 Pilot Richard Leahy was transferred to Royal Brisbane Hospital with serious burns. (http://www.pacificwrecks.org: Justin Taylan)
ABC
An investigation is underway into a plane crash in Papua New Guinea that has killed six people and left their Australian pilot in a serious condition in a Brisbane hospital.
Four adults and two children died when the Cessna 185 came down while heading to a remote airstrip in the Sarawaget mountain ranges of the Morobe province yesterday.
Sydney-born Richard Leahy, 68, who owns Kiunga Aviation, was the sole survivor.
His son Nicholas Leahy says his father was airlifted to Brisbane for treatment.
"He's in a serious condition. He's in the Royal Brisbane Hospital in the trauma unit," he said.
"He's got burns to 46 per cent of his body, he's also got a fracture in his spine. Most of the burns to his body are third-degree burns and he's being operated on as we speak."
It is believed the plane may have had engine trouble.
Nicholas Leahy says his father is an experienced and well-respected pilot.
"Dad's been flying up here for 40 plus years," he said.
"You'd be hard-pressed to find another bush pilot in New Guinea that's got more experience than him, especially in the mountain range which is his local area. His nick-name is Captain Cautious."
Morobe provincial police commander Peter Guinness, police and medical officers were flown to the accident site on Wednesday to retrieve the remains and wreckage, The National newspaper reported.
"The plane was completely shattered and we could not do much," he said.
No immediate cause for the crash has been offered because conditions in the area were considered fine.
"We will wait for the Civil Aviation Authority to do their investigation," he said.
Over the past few decades Mr Leahy, who lives at Lae, has been involved in the discovery of dozens of WWII wreck sites in PNG.
He has worked closely with the US Army CILHI, recovering the remains of troops missing in action and returning them to the United States.
It is the second plane crash in PNG this year after a plane came down in the Kokoda area in August, killing 13 people including nine Australians.
Posted by Malum Nalu at 12/31/2009 04:32:00 PM