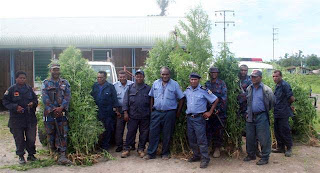 Caption: Inspector Michael Periwanga (5th from right) and members Operation Bright Star with the marijuana plants they uprooted in an early morning raid on Christmas Day at Vunapalading No. 3, . The plants will be destroyed.

By LYTHIA SUITAWA in Kokopo

A FATHER and his two sons are now in police custody in after more than K300, 000 worth of marijuana plants were found in their family garden during a police raid in the early morning hours of Christmas Day (Friday).

The raid which took place at Vunapalading No. 3 was part of a special Christmas New Year Operation code named Bright Star by Kerevat and Livuan police with assistance from Tomaringa’s Mobile Squad 18.

Acting Police Station Commander (Kerevat) Inspector Michael Periwanga who led the raid said the marijuana plants were inter-planted with the family’s food crops such as peanut and Chinese taro.

Inspector Periwanga said the family even had a nursery for the marijuana plants.

Police uprooted 30 matured plants ranging between 1.5 to 2m and weighing a total of 19kg.

Officers from National Agricultural Research Institute’s Islands Regional Centre in Kerevat estimated the local street market value of the plants to be around K310, 000.

Inspector Periwanga said the successful raid was a result of a drug and illegal substance abuse community awareness that he and his men conducted at the start of the operation.

“I am glad that the awareness we conducted encouraged people to come forward with information about these illegal activities but there is still more to be done,” he said.

“More people must realize the damaging effects of these substances and inform us so that we stop the use of these drugs.”

Inspector Periwanga also voiced concerns that the use of marijuana and homebrew are becoming more and more prevalent within Papua New Guinean communities.

“Particularly in , in the past, people sourced marijuana from the highlands but now they are growing it themselves and this is quite alarming,” he said.

More than 30 people have been arrested and charged for drug related offences since Operation Bright Star commenced on December 18.

The three and two other suspects are in custody at Kerevat Police Station waiting to appear in court.