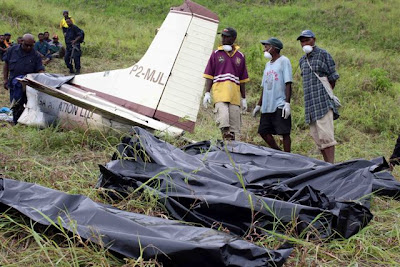 Police, villagers and rescuers looking on as Morobe provincial police commander Insp Peter Guiness (left) takes a closer look at the tail section of the plane which crashed at the Bengun hillside yesterday morning after retrieving bodies of those who died as well as airlifting the injured pilot to Lae for further medical treatment.

Six people were tragically killed when a Cessna 185 fixed wing aircraft, owned by Kiunga Aviation, crashed early yesterday in the rugged Saruwaged mountain ranges of Morobe province, Papua New Guinea, The National reports.
All six passengers, including two children, died instantly on impact.
Amazingly the pilot Richard Leahy, who owns the third level airline, survived but was in critical condiction.
The plane departed Nadzab and was headed for Baidoang airstrip when it crashed.
The charred bodies of those killed are now at the Angau Memorial Hospital morgue in Lae while Mr Leahy was evacuated to Australia for medical attention.
The 63-year-old pilot was found by locals, screaming for help near the wreckage, shortly after the crash.
The bodies of the passengers were retrieved by a search and rescue team led by Lae police and medical personnel.
Information received from the ground pinpointed the Bengun hillside, located between Gumbun and Tanam villages as the crash site.
The rugged location is about a three-hour walk from Boana, the Nawaeb district station, and is 17 nautical miles northeast of Nadzab airport.
At this stage, there are no definite leads to the cause of the crash, but engine failure is highly suspected as the weather was fine and Mr Leahy has a wealth of flying experience in PNG.
Posted by Malum Nalu at 12/31/2009 08:11:00 AM