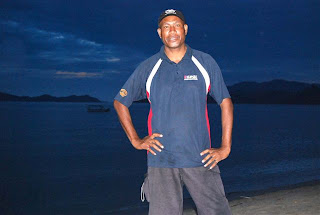 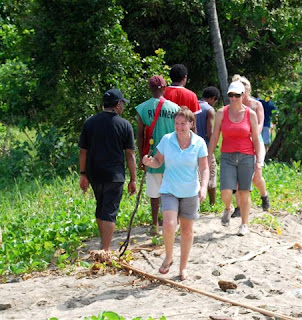 Lae expats returning after an unsuccessful hunt for the submarine tunnel 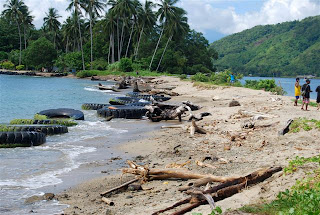 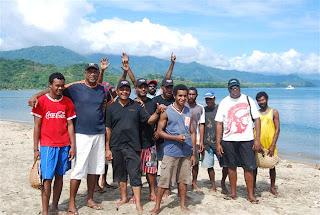 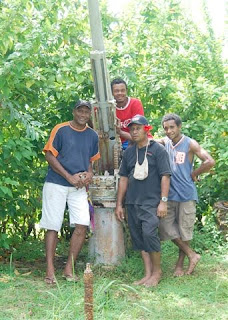 New Year Greetings from Salamaua Point. As they say in the local Gawac lingo – ‘Asalu ngayam’ or ‘good day’ which is the same as ‘sare lareva’ in my Toaripi of Gulf, ‘jobe’ in Garaina, ‘awinje’ in Menyamya and ‘zoang biang’ in Kote of Swit Finsch.

From Malalaua to Salamaua is a long, long way. There are many rivers to cross and many more mountains to climb and an ocean to swim. But after many years of wondering in amazement and wandering around in circles, I finally set foot on the narrow isthmus that joins Salamaua peninsula to the mainland.

I fulfilled my childhood dream of visiting this legendary place on Boxing Day last year in the company of another first timer Dadarae Logona and his son Titus. The Logonas are from Tubusereia in .

They say Salamaua is magical. I say it is still salacious and I will be going back. In its heydays, it was the place to be. Even now, it still has that magnetism.

Lae expats have holiday homes here and they say the fishing is good, so good they always keep coming back for more refreshing sea breezes and to test their angling skills where once warships zigzagged to test the accuracy of allied bombers in WWII.

Sadly the isthmus that connects Salamaua is slowly being washed away. Where once a road connected Salamaua point to the mainland, rising sea levels have eroded much of the land and the point is in danger of being cut off from the mainland.

Valiant attempts have been made to save the isthmus including dumping huge tyres and rocks as a sea wall but to no avail as nature carves a future for the peninsula.

Will Salamaua point, original home of the Buakap people become an island as a result of global warming and rising sea levels? I don’t know but if it does, one piece of history and my footprints will be washed away forever.

My old man was a colonial era teacher. One fine day, he brought a text book home which had pictures of Salamaua, Rabaul, Wewak and Goroka. It was post card perfect, the coconut palms dancing in the breeze, a boat in Salamaua harbor and locals walking along the isthmus carrying coconuts.

I asked the old chalk: “Where is this beautiful place?” He replied: “Son, Salamaua is near Lae. And Salamaua is very far from Malalaua.”

From then on, even as a little kid back in the early 70s, I promised myself that one day I would walk on that same isthmus. I left my Kerema footprints there on the morning of Dec 26.

When you stroll through that former colonial outpost, there are certain reminders of the past; a history steeped in affluent times gone by where the tapestry of the coast and its inland growth was once weaved forlornly, fluently and feverishly through here.

Salamaua was the one time staging post for the gold rush into Wau Bulolo in the 1920-30s and a wartime foothold captured by the Japanese on March 8, 1942 and then retaken by the allies a year later after much fierce aerial bombardment and ground offensive.

The town was recaptured by Australian and forces lead by the fearless General Douglas MacArthur on September 11, 1943 during the Salamaua-Lae campaign. During reoccupation the town was destroyed.

Salamaua was originally built by the Germans and given the exotic south seas name Samoahafen just as Dregerhafen and Finschhafen up the north east coast remain today as reminders of the Kaiser’s influence in New Guinea of the 1800s.

When gold was discovered at Wau, miners came from all over the world and made for the goldfields through Salamaua via the rough Black Cat Track which is today a major tourist attraction and an epic test of endurance for those foolish enough to retrace history.

Today the villages of Kela and Laugwi still occupy the site as well as well as a variety of holiday homes, mainly for Lae based expatriates eager to escape the potholed city.

Walking through the narrow strip, I could not help noticing adventurous names such as ‘Gilligans’ where you can get a cold drink, and ‘Margaritaville’ where they say the food is exceptional.

Even the nearby Salamaua Guest House, owned by the Morobe Provincial Government offers a self contained room for K44 per night and you can always find the friendly caretaker manager Mathew Gomuna from Garaina ready to help you.

Local legend has it that when the Japanese captured the town, they built an underwater tunnel under Salamaua Point to save their submarines and light landing craft.

Our hunt for this piece of history turned up fruitless as our guides could not agree to the exact location. So we turned our attention to just enjoying the cool breezes.

According to the online free encyclopedia, Wikipedia, early in 2007, a video production company from explored the rain forests of Salamaua.

The "Destination Truth" expedition team was looking for the ropen, a cryptid that is described in terms suggesting a Rhamphorhynchoid pterosaur, whatever lareva that is!

The explorers, including the leader Joshua Gates, videotaped a glowing flying object that seemed to correspond to local native ideas about the glowing ropen.

I did not see one such prehistoric creature but I came away happy at having fulfilled my childhood dream.

On the dinghy back to Busamang village, we passed the villages of Asini, the mission station of Malalo perched high on a hillock and the of and the beautiful .

I have a sentimental attachment to Asini but I know that I may never get to set foot on its beach. Perhaps, I will try one fine day.

Finally, farewell to sportswoman Florence ‘Floss’ Bundu, who was a team mate at the Stars Club in the 1980s at Hohola basketball courts, and to Ovia ‘OT’ Toua of HB, who was the first PNG Chief of Staff of this paper and to my good mate the late Henry ‘HK’ Kila, who was never ever short of jokes! Thanks for the happy memories.

Join me next week as we attempt to reel in the big one in one big fishing misadventure in . bigpatpng@gmail.com for more.