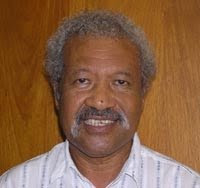 He is survived by wife Sandy Masau and sons Guy and Emmanuel, in-laws Janet and Trinnett, grand children Lawrence, Cassandra and Solomon, his mother Avia, brother Jack and sister Joan, Ruth and his in-laws and their children.

“Mr Kila’s passing is a great loss to the business community and the sporting fraternity of PNG. PNG has lost a good man of very humble demeanor,” Sir Michael said.

“I have found Mr Kila to be a very constructive partner in developing a healthy relationship between the private sector and the National Government,” he said and acknowledged Mr Kila’s contribution in promoting the Australia/PNG relations.

Close friend and deputy opposition leader Bart Philemon described him as a trail-blazer into insurance industry for 40 years, a major player in sporting development, and a key stakeholder in business development helping to nurture the business council from infant stages to its current dominant present.

“We have lost a true nationalist, an un-hailed statesman and definitely an outstanding Papua New Guinean unparalleled in private sector involvement.”

A member of the APEC Advisory Council representing PNG, he was a founding member (since 1995) and president from 2006 of Business Council of PNG, Managing Director of South Pacific Insurance Advisors Ltd; was president of PNG Sports Federation and National Olympic Committee (2000-2003) which caps an illustrious involvement in sports in diverse codes as PNG Softball, PNG Football League and PNG Rugby Union including a stint as a commissioner with PNG Sports Commission around September 2003.