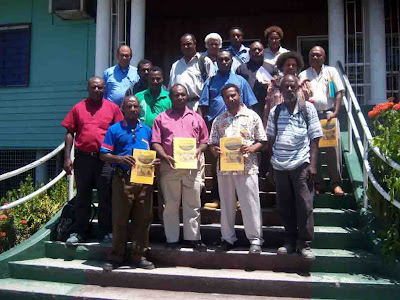 By SOLDIER BURUKA of DAL
Executives of a landowner company behind a major oil palm project in the East Sepik province say they are happy with the progress made so far.
Limawo Holdings Ltd officials said that infrastructure development in the initial stages of the Turubu oil palm project in the Wewak district was on the right track.
The 120,000 ha oil palm project will include major oil palm planting, a wharf, oil mill, township and other related infrastructure development.
It is expected to provide a wide range of opportunities for the resource owners and rural communities in Wewak and surrounding areas.
A major road network built by the landowner company’s joint venture partner linking Turubu Bay on the coast with Sepik Plains is nearing completion and will open up access to Wewak town and other communities.
Work on preparing the oil palm nursery sites is in progress.
Limawo chairman Aron Malijiwi, secretary Willie Nilmo and public relations officers Paul Bina and Francis Yaba made the observations during a presentation to the Department of Agriculture and Livestock in Port Moresby before Christmas.
With them were officials from East Sepik provincial administration who spoke highly of the oil palm project and its impact in the province.
Limawo officials said they were primarily seeking further funding assistance from the National Government to support the landowner company meet its obligations in the joint venture arrangement.
Mr Malijiwi said the project developers had followed all the required processes in getting the project off the ground, however, the landowner company was now calling on the government to ensure that the project was successful and provided benefits to resource owners.
“We are aware that there are many challenges to face with a major agricultural project such as Turubu oil palm, and we need understanding and co-operation from resource owners and all stakeholders,” Mr Malijiwi said.
“Our main objective is to ensure that the project becomes very successful and benefits the resource owners and rural communities.
“We are therefore seeking National Government’s assistance to provide continued funding in the next stages of development.”
Mr Malijiwi, who has been involved in oil palm development in West New Britain for over 24 years, said such large-scale development brought disadvantages as well but the people and developers were confident that there would be positive changes in East Sepik in the long-term.
Mr Nilmoh said there had been overwhelming support from resource owners, provincial government and politicians since the concept was initiated several years ago.
He said the resource owners and all stakeholders realised that such an impact project would bring benefits and boost the economy.
Road access will open up opportunities for people to take their produce to market and bring in basic services such as health, commerce and schools.
People can also look at growing other cash crops such as cocoa, rubber, coffee and vanilla.
“This is a win-win situation – our joint venture partner is aware that our objective is to bring changes and improve the well-being of the community,” Mr Nilmoh said.
“We don’t want to repeat the same mistakes that have happened to oil palm projects in West New Britain, Oro and Milne Bay provinces.”
East Sepik provincial administration officials said Turubu was the first of several impact projects planned for Sepik Plains that would open up opportunities for infrastructure development and other economic activities.
It is important therefore that the national government works in partnership with the provincial government to move the province forward.
DAL’s deputy secretary for provincial and technical services Francis Daink, who received a formal submission from the delegation, said DAL would study the document and consider how best it could assist.
Posted by Malum Nalu at 1/09/2010 12:00:00 AM