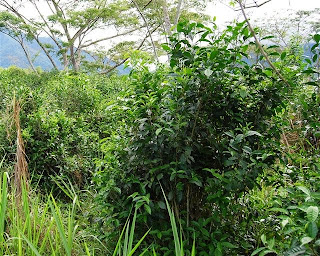 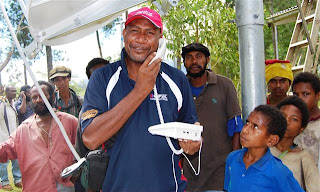 The author trying out the new telephone link in Garaina 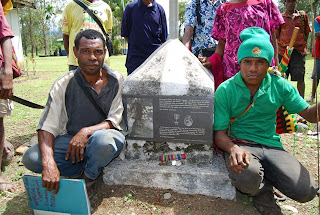 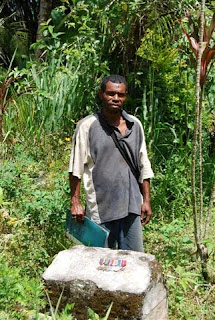 Cr Amos Sega, 7th born child of Sgt Maj Sega Birito, at the grave of his father. Resting on headstone are the campaign medals of Birito, which include the Bronze Star 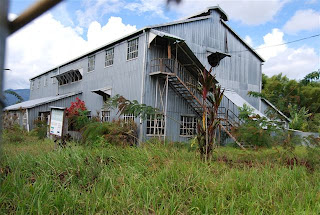 The Garaina Tea Factory, now shut down. At its height, it was the number one tea in PNG 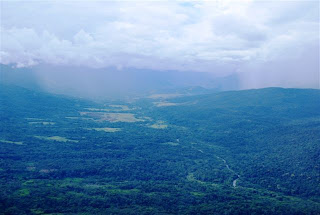 The grave yard is overgrown with bushes. The plain white cement headstone is sun bleached and cracked, the epitaph is faded and moss covered at the sides.

But in this simple grave under the scorching Papuan sun lies one of PNG’s greatest heroes of World War II – a man of remarkable courage – a man of the true warrior class who rose above his humble uneducated beginnings to shine on the battlefield among foreign troops.

The mighty Waria Valley is the final resting place of one of its finest sons and a legend of Papua New Guinea - except the legendary exploits of Sergeant Major Sega Birito is sadly, unknown outside his native Waria land.

Having visited the Waria Valley last week and being privileged to pay my respects at his graveside, I feel it my obligation to re-tell the people of PNG, Australia and the USA, of the fearsome Waria warrior who served all three nations with the highest credentials.

This is the story of a simple village boy from Sopa village in Garaina who fell in love with the police force, signed up with ANGAU in 1926 at Wau and served the New Guinea Armed Constabulary, going on long range patrols all over Papua and New Guinea with patrol officers, gold prospectors and even missionaries.

Birito later served on Bougainville Island as a policeman and it was his knowledge of that part of the country that was to distinguish him in battle during the war.

When hostilities commenced in WWII, Birito was on holidays in Garaina planning on getting married when ANGAU recalled him to police headquarters. He was immediately bundled off for scout training with the now famous coast watchers.

Strong and fearless, the tall rangy Waria warrior came to the notice of the Americans while undergoing specialist training in Melbourne, Australia.

The US Navy Special Forces, forerunner to the Navy Seals, enlisted Birito (or rather snatched him) from the Australians in Melbourne after noticing his remarkable courage in training and engaged him as a scout in their “M” Force.

The simple boy from Waria, appreciated for his camaraderie with the Australians and Americans, and known for his fearless spirit in battle, landed with the US Marines at Tulagi and at Guadalcanal. It was on Bougainville that he distinguished himself in gallantry.

His Bronze Star citation read: “Constable Sega, ANGAU, distinguished himself with meritorious achievement at Bougainville, Solomon Islands, from September 22-28, 1944. While making reconnaissance into enemy territory, he came upon a village occupied by hostile troops. Crawling among the native houses, he collected information regarding enemy strength and dispositions. After reporting this information, he returned with a combat patrol which successfully attacked the village. On a later recon, he located a hostile camp and leading American troops, assisted in killing 14 of the enemy.”

Sgt Maj. Sega Birito is the first and only Papua New Guinea soldier I know to have received the American Bronze Star for gallantry in combat.

General Douglas MacArthur, the US General famed for his ‘I shall return’ promise to take back the Philippines from the enemy in WWII, conferred Sega Birito with his star at Wau.

Birito saluted the mighty US General as 10,000 of his tribesmen armed with bows, arrows and clubs applauded from the sidelines in a resonating cheer that echoed down the Waria Valley.

At the Queen’s Coronation in 1952, Birito was invited to visit England but fell sick at the last moment. However, when the Queen did visit PNG in later years, the Bronze Star hero met the Head of the Commonwealth.

She conferred on him the Queens Medal for Exemplary and Long Distinguished services to the Royal Papua New Guinea Constabulary.

In Garaina, beside the old RSL (Waria) building stands a simple stone flagpole. It was erected in 1973 by the American Government in appreciation of Birito’s services to the US Marines, following a visit by Colonel Douglas Hubbard, director of the Admiral Nimitz Centre in Fredricksburg, Texas.

Why would the Americans send such a high ranking officer to visit an old policeman in an unknown part of PNG? The answer lies in his Bronze Star citation. Americans revere and worship their heroes and Birito to the US Navy’s “M” Force was a fearless hero whose exploits are held in high regard.

His only complaint against the Americans was crooked job a medic did on his ear, which had been partially shot apart by enemy fire. The US Marine medics did a pretty hasty job on their trusted forward scout that when the wound healed a few weeks later, his ear was set a bit crookedly, which he blamed of robbing him of his once handsome looks!

The Americans erected a memorial cairn which reads: “To the memory of Sergeant Major Sega Birito of the Royal Papua New Guinea Armed Constabulary whose personal efforts during the Pacific Campaign in World War II resulted in his being awarded the American Bronze Star for gallantry, while serving with the United States Forces on Bougainville in September, 1944. In grateful appreciation, erected by the Government of the United States of America and the Admiral Nimitz Center.”

Now his son Amos, the councilor for Ward 11 in the Waria Local Level Government, is taking up a new fight in his father’s respected name.

Amos wants the Australian, PNG and US Governments to fund the building of a government centre and a double classroom in Garaina.

Amos said: “I don’t want any other benefit; certainly I don’t want any money. I just want these governments to recognise the efforts of my father during his service to the armed forces and to erect a building in Garaina to house the local level government offices.

“I also want to see a double classroom built at Garaina Primary School and both buildings to be named Sega Birito so that younger generations will know and honor the memory of this foot soldier.”

Cr Amos is the 7th born of Sega Birito and his wife Teira Ponito, both of Sopa village.

Cr Amos can be assured part of his problem has been solved with the arrival of a new VSAT telecommunications system, linking the Garaina Station with the rest of the world.

In the days of old man Birito, there was no such telecommunications. Now with a vibrant visionary young leader in local MP Sam Basil, the winds of change are descending on the windswept Waria plains.

Mr Basil, who only collected seven votes from 4000 voters in the last election, has promised K2 million from his district services improvement funds to revive the Garaina Station and kickstart the ailing economy of the once vibrant tea and coffee industry.

Waria LLG president Morokai Gaiwata is upbeat about the future of Garaina. On the list of musts are the return of police, a dozer and an ambulance for the health centre.

One old man told me: “Member is giving us a lot of money. But before that money comes, law and order must return to Garaina.” True words of a wise old man.

As he was departing the beautiful valley, an old lady stepped up to Mr Basil and gave him a string of dog tooth and said: “This is the money of my forefathers. It has lasted for generations. You are giving us K2m but will it last?”

On the plane back, the maverick politician, feared in the halls of Waigani for his no nonsense approach to tackling corruption, showed me his dogtooth money: “This Valley will rise again,” he promised.

Certainly, for better or worse, one councilor will be watching and waiting, Cr Amos Sega.