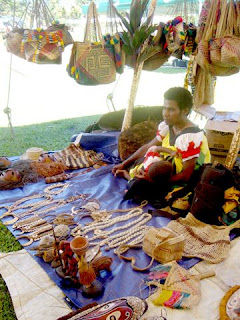 Caption: Sesley Mainga from Angoram in East who travelled all the way to Lae to sell her handicrafts during the expo last Friday.  – Nationalpic by DOREEN POLOH WAIM

FINDING local markets for traditional handicrafts is one of the difficulties that confront women in the rural areas, The National  reports.

Three women from Angoram in province who came all the way to Lae, Morobe province, to participate in the inauguration PNG Women in Business (WIB) expo said on most occasions, they only had seasonal markets.

One of the women, Sesley Mainga, who specialises in weaving baskets, making shell head dresses and wooden carvings said they were able to sell their wares depending on tourist ships that occasionally visit the province.

Mrs Mainga said selling her handicraft in local markets had not been profitable for lack of demand.

She said many women in her area would like to travel to other provinces to sell their products but that might be too costly for them.

The two other businesswomen in her group, Rosa Simon and Schola Akwat, while expressing similar sentiments, added they joined the expo to meet potential handicraft collectors and distributors.

They said with the exposure, they also hoped to promote their culture and the significance of traditional handicrafts to the younger generation.

They also said the expo had also given them the opportunity to discover potential markets through established network with women from other provinces.