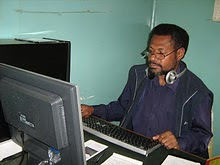 My longtime journalist mate Makalai Bel, based with the National Broadcasting Commission in Goroka, has just up his own blog http://berlmlinksall.blogspot.com/ which should add to news and views from that part of the country.

“Having graduated from UPNG as a journalist in 1980, I covered Gulf, Madang, National Capital District and took short weeks to months assignments of Fly, Simbu and province on news coverage duties,” he writes.

“It is here that I really developed my skills in news writing, news production and publishing, moving from a manual type-writer in the 80's.

“By 90's bought my own electric typewriter and a word processor, and upward on to a computer to write and publish a community newsletter in 1992.

“Fascinated by computers, have taught myself almost everything about computers, desk-top publishing, internet and email and now having hands-on try on opening my own blog.”

Welcome to the fast-growing PNG Blogosphere, Makalai, which is having a big impact as an alternate and independent source of news and views from the country.