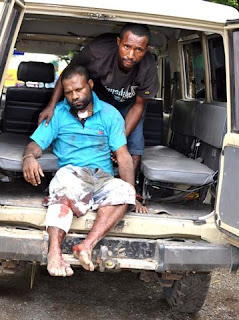 Convicted rapist Duma Kerowa, one of 12 prisoners who walked out of Bomana jail in January with alleged bank robbery mastermind William Nanua Kapris, was recaptured at 9-Mile settlement in yesterday.

After receiving a tip off, police and warders involved in the special security operation surrounded a house located near the 9-Mile clinic and arrested Kerowa at 9.45am.

The escapee appeared petrified and was trying to flee when he was shot on his shin and taken to the for treatment.

Kerowa, 39, from Chuava in Simbu province, was convicted in Dec 2005 and is serving a 25-year jail term for abduction and rape.

According to police intelligence, Kerowa was planning to catch a plane to Simbu to “hide” when authorities were notified.

Policemen involved in the operation said the escapee also attempted to rape a young girl at 9-Mile settlement yesterday, before he was caught.

When The National arrived at the 6-Mile police station, Korowa was accompanied by alleged high-profile bank robbery suspect Kito Aso who was recaptured near Morata on Monday afternoon.

The prisoner (Korowa) was in agony from the gunshot wound he sustained and his bandage was soaked in blood as he was being transported to the .

Korowa’s recapture brings the total number of those recaptured to seven after Jan 12.

It is still uncertain as to when those recaptured so far- William Nanua Kapris, James Pari, John Siko Wel, John Peter Plesman and recently recaptured Korowa and Aso- would be facing their escape from lawful custody charges in court.

Remandee Oliver Ben Gabi, who was the first of the 12 to be recaptured around Sogeri, appeared in court on Jan 26 and got a 6-month sentencing at the Boroko district court.

Gabi’s earlier imprisonment as a remandee before the escape was for being an accessory to the BSP bank robbery in Madang.

Police Commissioner Gari Baki, in a statement yesterday, reassured the public that police special operations would continue round the clock to recapture remaining escapees from jails around the country.

He said the public showed its interest to fight against crime.

Mr Baki said the consecutive arrest of some of the country’s dangerous prison escapees reflected on the dedication, commitment and professionalism of police personnel engaged in the special operation